As I'm sure everyone knows I'm a huge Cynthia Eden fan :)!  I was recently approved to read a ARC review copy of Alpha One and I LOVED it!
It was an action packed, high suspense, keep you on the edge of you seat, unable to put it down kinda book...  And I discovered that in just the first chapter!! 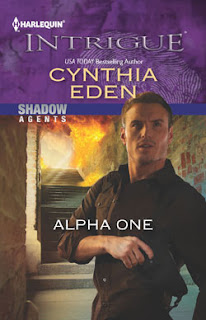 Amazon LinkAlpha One has it all!   The one that got away, second chance love, lies, secrets, suspense, and of course an Alpha male :)  All the components needed for a great romance book!  Not to mention a murderer on the lose, a take down anything and anyone in the way money hungry villain, and a secret that could destroy everything...
Yep I'd say Alpha One is definitely a great romance :)

Juliana James is abducted and being held hostage.  She is left to think of all the things that went wrong in her life.  And during her hostage period she keeps thinking of the one who left her.
Logan Quinn left Juliana years ago thinking it was best for her.  Trying to hide who he really was.  Yet she ends up being abducted and in the hands of a man who no witness every survived.
Yet when Juliana needs to be rescued its Logan who saves her from hell.  But in a world of lies and and secrets shes still not safe.  Logan stays with her protecting her from all harm.  Which isn't easy when you don't know who  you can trust.
Logan has a secret that could destroy everything....  And the ultimate question is put to the test...  Can love really survive anything?


This book will be released January 2, 2013 and its a must read!!!
For any other Cynthia Eden fan if you read her Deadly series you will LOVE Alpha One!  It has that same suspense thrilling feeling to it!
Here is my review of her Deadly Series
http://savannahmiller1987.blogspot.com/2012/07/cynthia-eden.html

Disclaimer:  I was provided this book for the purpose of review.  I was not in anyway paid to write my review.  All opinions are my own.