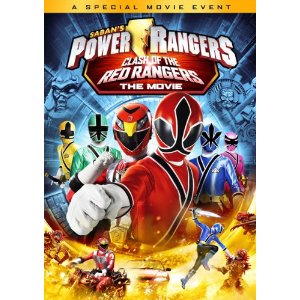 When I found out I was going to be able to review Power Rangers it brought a huge smile to my face.  Because it made me remember a Black Friday from quite a few years ago.

~ My brother loved the Power Rangers he watched them non-stop and collecting them became an obsession.  One black Friday my mom and aunt took me to the mall and said we had to get 2 of the green Power Ranger.  One for my brother and one for my cousin. I thought it was going to be fun I couldn't wait to get into the mall.  I stood outside huge smile on my face just waiting for the doors to open.  I was so naive!  At 4:59am my aunt looked down at me and said 'Show Time kiddo.'  Umm okay a few second later a man with a  sweet smile appeared at the door my aunt grabbed me up threw me over her shoulder.  Again I tried to be optimistic it was getting hard with my face smashed into my aunts backside.   Then the man with what I now considered an evil smile threw those doors open.  And so the stampede began, my aunt and I were part of it.  A few seconds after entering I heard my mom scream 'Tina over here!'  then my aunt went rushing into the swarm of humans.  She yelled back at me to grab the green one if I see it.  Grab the Green One!!  Didn't the woman know we were in a stamped of raging humans fighting over toys.  I swear at one point a woman growled at me lol.

We did get 2 Green Power Rangers and that Christmas my brother screamed and jumped up and down when he opened it.

So yes Power Rangers have been part of my life for a very long time.  I was super excited to see I was going to be able to introduce them to my kids :).
My kids and I watched it the second it came in the mail.  They love it!  The thing I like about the Power Rangers is boys love action, but to often it to violent or to graphic.   With the Power Rangers its clean.  My boys get to watch sword battles and I don't have to worry about them seeing guts and blood.

SYNOPSIS
The Samurai Rangers team up with mysterious RPM Ranger Red to fight off dual threats from Master Xandred's Mooger army and a robotic supervillain from the RPM Ranger's dimension  but when both Red Rangers get struck with hypnobolts they turn against one another, and the fate of the world hangs in the balance.
APPROX RUN TIME 45 Minutes
released March 5th 2013
Amazon Link

My boys had so much fun watching this and I enjoyed watching it with them.  My 21 year old brother did ask to borrow it.  I told him that Green Power Ranger better be in Mint condition.

Disclaimer:  I was given this product for the purpose of review.  I was not paid in anyway to write this review.  All opinions are my own.