I was given these toys for the purpose of review I was not paid in anyway to write this review all opinions are my own. 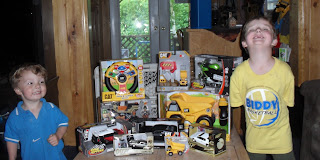 One of the toys that have survived the generations is cars.  No matter what it seems like everyone had a toy car as a child.  I know me and my brother did, as did my dad and his dad and heck even my dad's dad!!  Its that one toy that no matter what will always be fun to play with.

Now I know through out the years toy cars have def. changed a bit, a remember as a kid I had huge heavy metal trucks and my grandfather claimed his were made of wood.  It wasn't until I had my own 2 little boys that I realized just how far along toy cars have really come!
They now make sounds, move on their own and have removable parts.  When I was a kid if a part came off it was broke!  Now that is all part of the fun making your child not only the driver, but also a mechanic.   When I was given the chance to review for Toy State I was truly in awe of all the amazing choices!  And a bit jealous that I didn't have these cool cars when I was a kid!
My boys had the chance to review cars from 4 different categories: 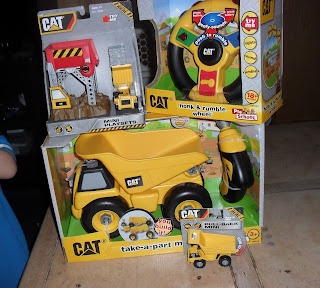 These vehicles act like real a Caterpillar machine that can be seen on major construction sites.  They move and motion just like the real thing!  I'm sure you know with 2 little boys these were a huge hit!  Right now the road by our house is being re-black topped so we see lots of trucks all day.  Normally my little guys just watch. but now my boys demanded that they go work on our road and took out their new Cat trucks :).  I was amazed at how durable they are my little guys def. loaded them up!
We reviewed:
Honk and Rumble wheel had so many lights and sounds.  It was perfect for my 2 year old, Quinn.  He loved how he was able to interact with this toy and pretend he was driving a huge truck of his own. 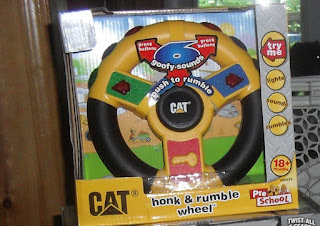 Take-a-part machines with drill, both my kids loved this toy they had so much fun taking off the tires and putting them back on!  Plus after they "fixed" it up they were able to load stuff in the back (rocks) and drop them off at their pretend road repair site. 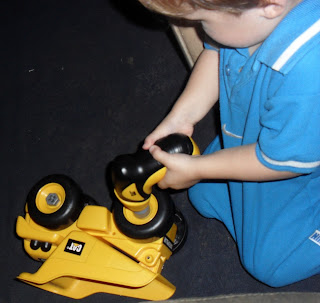 And last but not least 2 mini Cat machines 1 that came with a cute set that "dropped" a boulder right into the back of the truck.  FYI don't use the word cute around little boys.  My 5 year old stuck his hands on his hips and told me its not cute mom its manly! lol 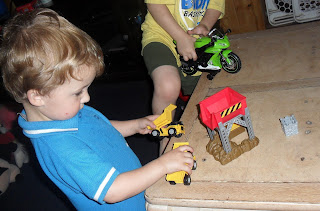 My boys have huge imaginations and for them these toys were the best thing ever!

Next we were able to review: Road Rippers 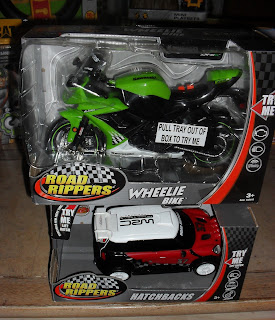 Very cool custom-designed vehicles just for your little one! Multiple play functions, lights & sound fun!  My kids loved all the music and sounds as I'm sure most kids do.

First was Wheelie Bike not only does this bike move on its own it also plays fun music and even rises!  Popping a real wheelie!  When I showed Brandon Jr that we would be reviewing for this company he pointed right at this Bike and told me he really REALLY wants that one.  I was so happy to open the box and see this was one of the toys he would be able to review.  And it is his favorite of course. 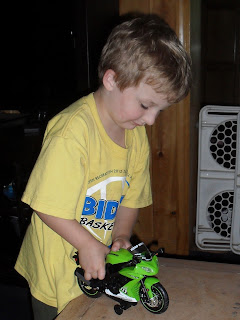 Next they were able to review Hatch backs!  Super fun the back opens and changes into 3 different speak sets.   My kids love switching it up and it really kept them engaged 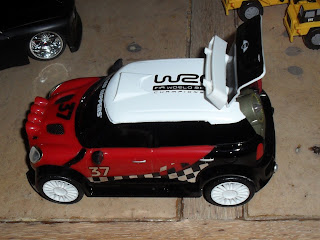 Next they were able to review cars from: 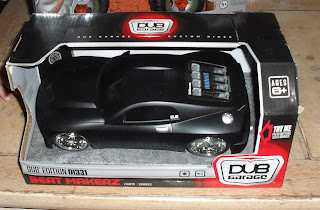 These are dual mixing decks and mixing sounds that let your kiddos be the DJ! Hip-hop music, fun vocal phrases, and exciting light effects.  And your kids control it!  They features to control are on the car letting them mix it up on their own!

My kids were able to review:
Beat Makerz
My 5 year old went crazy making his own beats and my 2 year old was dancing along.  I wont lie I was a bit envious yet again I remember as a kid my huge metal trucks.  The only time they made noise is when I left them in the rain and the hinges got rusty!  Again I just can't believe how cool toy cars have gotten! 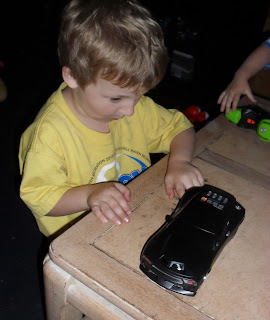 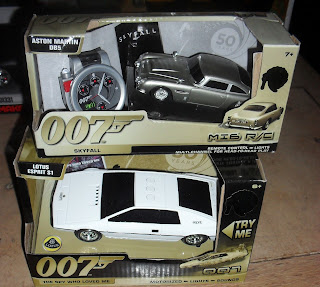 Okay I'm pretty sure the title of these cars speaks for itself!!  They are motorized driving action complete with working head and tail lights, realistic vehicle sounds and the classic James Bond Theme music!

Even though my boys are to small to realize who James Bond is I thought it was awesome!
They reviewed two 007 cars.  You see the smaller one with the watch..  THAT WATCH IS A REMOTE TO CONTROL THE CAR!!
I know I'm over excited, but I thought that was so awesome.  My kids yelled at me several times that I had to share :(. 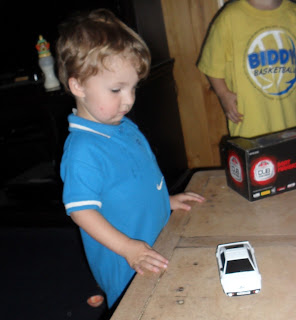 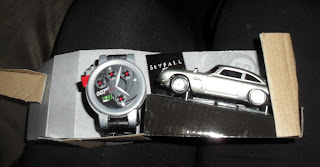 Last but not least we were able to review a GearHead car!  My kids love it, not only does the car go lower and higher it also has removable parts!  You use your little mans (Brandon jr is holding him) head to remove things and turn things! 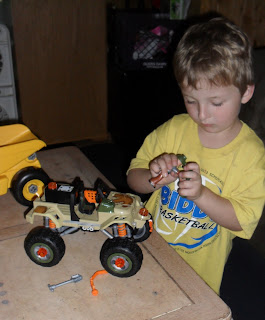 My kids love each and every car/truck!  The people at Toy State def. know what they are doing, they really play on our kids imagination taking play time to a whole new level!

You can buy these toys at Walmart, Target, Toy R US and Kmart!
If you want to learn more please see the link below:
http://www.toystate.com/

You must be 18+ to enter and live in the continental USA NO PO Boxes please!