Twilight with the Infamous Earl Review

I was given the book in this post for the purpose of review.  I was not paid in any way to write this review.


Twilight with the Infamous Earl Review 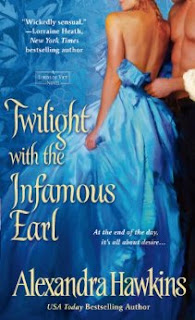 Though many of you may not know this I am a bookworm.  Some days I drive my hubby nuts because I have my nose buried in a book.  Not to mention all the money I spend on e-books and print books.  My poor hubby's wallet suffers because of my addiction to reading.  And he blames one person....  Alexandra Hawkins!!  A few years ago (though it seems much longer)  I was content to read  a YA (young adult) book once or twice a year.  Then in Dec of 2010 I read my first romance book All Night with a Rogue, written by the lovely Alexandra Hawkins.  It was love at first word!  Since then I have discovered so many amazing romance authors, but Hawkins's books have always and will always remain my favorite.  When her books come out I can't get them fast enough!  I am even so lucky as to have autographed copies of some of her books.

Though I adore Sin's book All Night with a Rogue from the very first book I as many other readers were intrigued with another Lord of Vice.
Frost...
The Lord of Vice series consists of 7 books we got to watch each lord fall in love.  Every book kept you on edge and praying/hoping for a happy ever after.  Yet in each book we were faced with Frost to be honest at times I didn't know if I loved the man or hated him!  Yet after each book I found myself wondering when it would be his turn.  You see the man HATES the idea of marriage and family and settling down.  He is happy to live his life as a wild man doing as he pleased when he pleases.  He fought each of his friends when the feel in love.  He even sent his poor little sister away to keep her from one of his dear friends....  It didn't do much good (After Dark with a Scoundrel)
One by one his friends got married leaving him as the sole bachelor in the Lords of Vice.

Since 2010 I have long awaited the day when this most wild Lord of Vice would be tamed.  I won't lie, my expectations were very high for this book.  And each and every one of them were reached and went well beyond!  I knew I would like Frost's book.  Little did I know I would love it and become obsessed to the point I was un-able put it down and stayed up to 4 am reading!!

Okay I have a nasty habit of giving away spoilers so I won't go too much into detail.
Emily swore revenge on the man who ruined her sister.  And you may have already guessed that man is Frost.  Frost whom is used to women falling at his feet can't seem to understand why this young woman fights him so much.  Not only does she not fall to his every charm she has also bad-mouthed his club, Nox.  Emily is constantly challenging him and refusing to admit she has feeling for him.  And with great guilt Emily has to admit she is charmed by this man, yet she hates herself for it since he ruined her beloved sister....  A huge battle of wills begins.

For once Frost finds himself infatuated and unable to give up hope of claiming this woman.

And poor Emily is so upset she is falling for the one man she swore revenge against.


I love this book, I was unable to put it down!  I was worried that Frost would dominate any woman who dare claim his heart, but Emily is no weakling.  She stands up to him every chance she gets.  For those of you whom have read each of the Lord of Vice I promise you that Twilight with the Infamous Earl is everything it promised to be!

After reading it I was left with that sated feeling you get only after finishing an amazing romance novel.
It wasn't until later that the heartache set in, knowing that I have read the last Lords of Vice book!  Alexandra is amazing author though and I know it won't be long until she is writing another series!  I can't wait to see what she produces and as always I will be a devoted fan :).

For those of you who have not yet read Hawkins's work I hope you will!  Her books got me started on romance novels and I promised that she will become a favorite of yours too.

The book will be released 11/26
Below I will include the Amazon Link:
Amazon Link

Also I will include the link for Alexandra Hawkins's website so you can read more about each of her amazing books :)
Website

Hawkins's is an amazing author and no bookshelf is complete without her work!