Ravensburger: Bugs in the Kitchen review

Disclaimer:  I was given products in this post for the purpose of review.  I was not paid in anyway to write this post.  All opinions are my own. 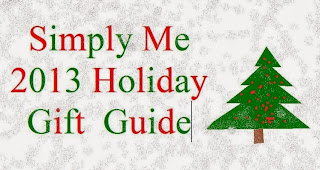 Ravensburger: Bugs in the Kitchen review

I try my hardest to teach my kids the true meaning of Christmas, but lets admit it toys are a HUGE part of Christmas!  This time of year it can be super tough to find Santa Claus worthy toys.  And by tough I mean there are so many you have no clue what to get!!  I tried to sit down with my little guy and make a wish list and by the end of it I had 2 things.....  A new puppy (So not happening) and video games.  So with that I'm left to my own devices to find great gifts.

After searching the internet and reading reviews I found a super fun game that I know my little guys are going to LOVE!
Bugs in the Kitchen 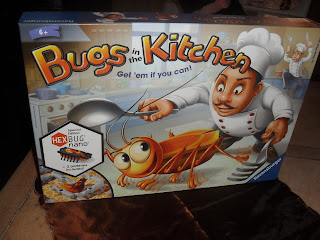 About the game:
There's a bug in the kitchen! Hurry get rid of it! The "bug" is a battery-operated Hexbug Nano (from Innovation First) that crawls across the 3D game board as players attempt strategic moves to lead it into their traps. The board features 24 utensils that rotate in place to create paths for the bug. Players roll the die to see whether they can turn a fork, knife, or spoon to change the bug's trajectory. Players start the bug in the middle of the board and move fast to turn the utensils in a direction that will lure the creeping creature into their snare. A wrong move can let the bug escape! Each bug that is captured earns the player one bug token, and the first player to collect five tokens wins the game.
Suggested age:  6+
Price: 24.99
Batteries included
Players: 2-4
Time to play 15-20 min
Available at Target

Okay this game is so fun even I had to get into the action!  The utensils are super easy to turn making it perfect for little fingers. 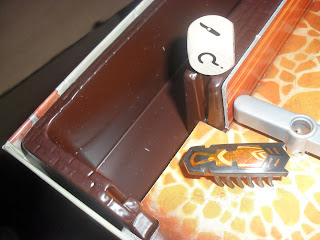 The little racing nano bug had my kids cheering and having a blast!  You simply roll the die which has utensils on it.  Which ever utensil you roll you are able to move.  The strategy is to move the ones that will get the bug closer to your trap. 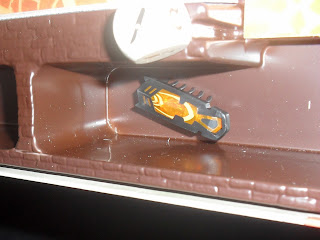 We had a blast playing and I know all little kids will love this game!  It is suggest for 6 years and older, but I was able to help my 2 year old play.  I just had to watch he didn't put any pieces in his mouth.  Its one of those games that after you play once or twice with your kid they can do it on there own!  Which was great because as much fun as I had playing the first time I couldn't play the 20 something games that my little guys wanted to play.  It kept them busy all day......  Oh and parents besides my kids cheering the game was quite!  No annoying overly obnoxious noises!  So not only is the game kid friendly its also parent friendly too :)

If you want to learn more or purchase for yourself see my link below:
Ravensburger: Bugs in the Kitchen Target link