Shadow On The Mesa review


Shadow On The Mesa review 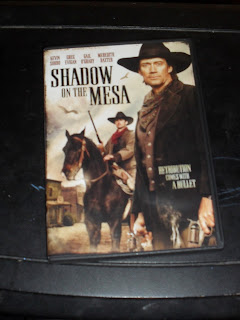 When Wes Rawlins (Wes Brown), one of the West’s most proficient bounty hunters, decides to avenge his mother’s death, he sets his sights on his estranged father, Ray Eastman (Kevin Sorbo). When he tracks Eastman down, he ends up becoming embroiled in a battle over his homestead and finds himself drawing closer to the father he never knew.

My review:
One thing you can count on when going to my pappy's house is a cowboy movie being on TV.  Some days I think his tv got stuck on that channel!  In all seriousness he loves them.  Something about the Ole West :)
I'm sure you know growing up I spent a lot of time with him, so by default I too love a good western.  I always thought that only the oldies were goodies, with a rare newbie making a good impression.
When I was getting ready to watch Shadow On The Mesa my grandfather warned me it better be good or he was breaking that DVD....  If you knew my grandfather you would know that he means it lol
It was amazing!  If a "newbie" western can catch and keep my grandfathers attention you know its good!  Oh and yes the DVD is still in one piece :).
The story line was mesmerizing and had you on the edge of your seat waiting to see what was going to happen.  We couldn't turn away.  The acting was amazing I can safely say this is a must watch movie for all Western lovers :)!

Remember it wont be available until the 17th