The Sound Of Music coming soon!

Disclaimer:  I will be provided a gift card code in order to buy pizza for my party in exchange for promoting :)


THE SOUND OF MUSIC 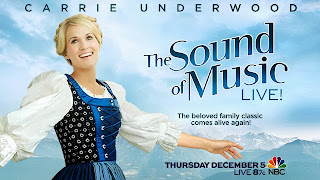 I absolutely loved the original Sound of Music!  I remember watching it as a kid with my mom and even though I had no clue what it was about I remember being enchanted.  As an adult I'm much more in-tuned and can't wait to see the New Version!

Let me tell you about about the movie so you can get as excited as me.
When: December 5th
Time: 7:00pm CST (8:00 pm EST)
Where: NBC
ABOUT:
THE SOUND OF MUSIC From executive producers Craig Zadan and Neil Meron ("Smash," "Hairspray," "Chicago") comes an instant holiday classic: "The Sound of Music," based on the original Broadway musical. Carrie Underwood and Stephen Moyer star as Maria and Captain von Trapp in this beloved story of the young novice who falls in love with Captain von Trapp and his seven children, set against the backdrop of Nazi-occupied Austria. The jewel in the Rodgers and Hammerstein crown, "The Sound of Music" contains some of the most famous songs ever written for the stage, including "The Sound of Music," "My Favorite Things," "Do-Re-Mi," "Sixteen Going on Seventeen," "Climb Every Mountain" and "Edelweiss." This new version of "The Sound of Music" will be a faithful adaptation of the original stage musical, to retell the story for a whole new generation. And more than that, it will be broadcast LIVE, adding a whole new level of immediacy and excitement. Get ready to reintroduce your family to the most joyful, most emotional and most musical family adventure of them all.

Is anyone else as excited as I am about seeing Carrie Underwood!!  I'm inviting over a few guest to watch The Sound of Music.  I hope you will join me and watch this amazing movie!!