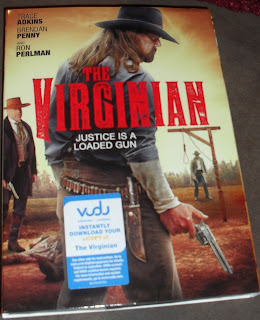 The Virginian will be locked and loaded on Blu-ray and DVD exclusively at Walmart and Sam’s Club, as well as digitally everywhere,January 7 from Cinedigm and Nasser Entertainment.

Based on the long-running classic television series “The Virginian,” this all-new adaptation is directed by Thomas Makowski (WWJD: What Would Jesus Do?) and also features Brendan Penny (“Supernatural”). A riveting and action-packed western, The Virginian tells the story of a handsome and enigmatic enforcer (Adkins) for a cattle baron (Ron Perlman) in Wyoming, who took him in after his parents were killed. Set against the backdrop of the Old West,the story of the Virginian’s past unfolds amidst a wealth of corruption, deception and gunplay, and the drama lays bare an unwritten law of the times: justice is a loaded gun.

My review:
I'm sure at this point you are starting to realize I love watching Westerns!  My hubby hates when I bust out my Lonesome Dove dvds and have an all weekend marathon.  Growing up though Westerns is all my grandfather watched.  So through him I developed a love for cowboy movies :)!
I remember as a little girl I would watch reruns (I was only born in 87) of The Virginian with my pappy.  (At 4 I was in love with James Drury lol).  When I seen they were making a remake I couldn't wait to see it!!  Then I found out Ron Perlman (HellBoy) would be in it and I was beyond excited :)!
Okay so I know you are all wondering what I thought....  I LOVE it!  It def. did the old series justice the rolls were well played/casted and it had all the great characteristic of a great cowboy movie :)

If you were interested in buying please see my link below:
Walmart

Remember it doesn't realease until 1/7