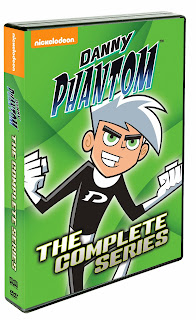 Danny Phantom: The Complete Series Available on DVD January 28, 2014 from Shout! Factory.
Find out how an average kid became part ghost-and all ghost hunter! With the extraordinary ability to turn himself into a super-heroic apparition, Danny Fenton must track down and defeat ghastly ghouls, while keeping his identity a secret! All three seasons of Danny Phantom will be available in one  package.  Get ready to take a trip to the other side with this 10-DVD set featuring all 53 original episodes of the hit Nickelodeon series. And you thought the hassles of everyday high school life were bad! Meet Danny Fenton, a good-natured, ordinary 14-year-old kid with extraordinary powers. After an accident involving ‘Ghost Zone’ portal of his two highly eccentric ghost-hunting parents, Danny now has the half-ectoplasmic DNA of a ghost, giving him the ability to fight off the horrible spooks, specters and vengeful ghost hunters threatening our world! But before Danny can defeat anything, he must first learn to control his newfound powers with the help of his best friends, tech-head Tucker and self-proclaimed goth Sam. Danny Phantom features an all-star voice cast, including David Kaufman (The Buzz on Maggie), Grey DiLisle (Rugrats, The Fairly Odd Parents), Rickey D’Shon Collins (Recess), Colleen O'Shaughnessey (Naruto), Rob Paulsen (Pinky and the Brain), Kath Soucie (Dexter’s Laboratory, Ben 10) and Martin Mull, Frank Welker (Transformers).

My review:
Brandon Jr LOVES Danny Phantom!  I was really excited to see all the episodes were going to be on a DVD set.  I asked my little guy to tell me in his own words what he thought of the show.  According to him its cool and really funny.  He is a man of many words lol
To get into more detail the graphics are great and I like the fact its a show I don't have to worry about my kiddos watching.  Not guts, blood or anything gory like that.  The story lines are fun and I myself have even enjoyed sitting down and watching episodes with the kids.  I think this show could be enjoyed by all ages.  When I told my 18 year old sister I got it for review she was even excited and wanted to borrow it :).