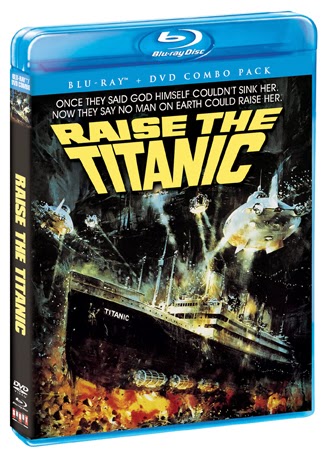 I'm absolutely fascinated by the Titanic!  I remember in middle school doing a report on it and I have to say it was the first time ever I enjoyed doing homework.  And then the movie came out and I think my cousin and I went to see it 3 times in theaters!!

So I'm sure you know I was thrilled to be able to review Raise the Titanic!

Join the underwater race to salvage the Titanic and its vital defense cargo when the  Cold War thriller Raise the Titanic makes its Blu-ray debut January 21st, 2014 from Shout! Factory.  The Blu-ray/ DVD combo pack boasts an all-new high-definition transfer  as well as a new featurette The Making of RAISE THE TITANIC,
Adapted from Clive Cussler's international best-seller, Raise the Titanic follows the exploits of American special agent Dirk Pitt as he sets out to recover critical material from the Titanic which could make the US impregnable to atomic attack. The ship is down too deep for divers and the only solution is to raise it. The incredible project must be managed in absolute secrecy due to the threat of deadly interference from a rival nation. When the Titanic is finally, and majestically, brought to the surface , it’s discovered the vital, rare material is missing!


My review:
I really wanted to be blown away by this movie and in the end I thought it was okay. I enjoyed seeing a movie about the Titanic, the visual effects were amazing and the acting was great! And the adventure was thrilling.