Disclaimer:  I was provided a copy of this movie for the purpose of review.  I was not paid in anyway to write this review. 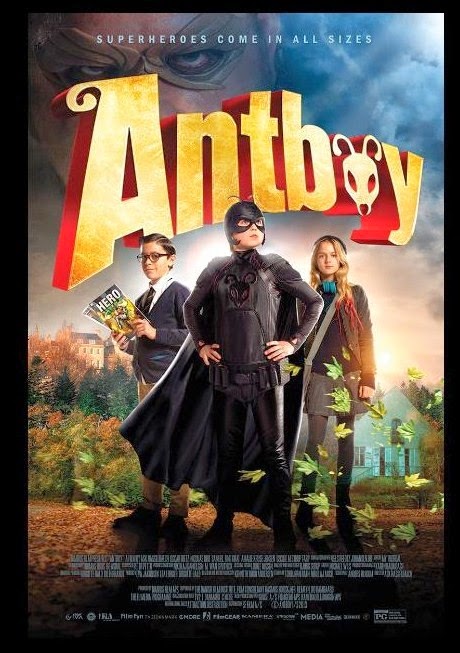 A young boy who yearns to be something “special” transforms into a mighty super hero in the quintessential family adventure, Antboy, exploding into theaters April 16 from Cinedigm. Hitting screens in Los Angeles, Dallas, Denver, Phoenix and Seattle, the highly acclaimed film, based on the popular Danish comic series by Kenneth Bøgh Andersen, premiered at the 2013 Toronto International Film Festival. Ordinary, overlooked 12-year old Pelle (Oscar Dietz) is transformed into an extraordinary superhero after he is bitten by a super-ant and inherits its abilities. Overnight, the boy who nobody noticed becomes a local hero as he is dubbed “Antboy.” With the help of his new friend and sidekick, comic-loving Wilhelm, climbing walls, flipping cars, stopping robbers and saving babies all become part of his new dream life. But all this changes when super-villain “The Flea” kidnaps a young girl, the subject of Pelle’s affection and terrorizes the citizens of Middelund. Antboy, with his sidekick Wilhelm and their friend Ida who won’t take no for an answer, must fight this treacherous evil, rescue the damsel in distress, save the town from a super-villain and be home in time for dinner. Full of heart, humor and one special hero, Antboy is directed by Ask Hasselbalch, and produced by Birgitte Hald, Eva Jakobsen and Lea Lobger.


My thoughts:
My boys and I love having movie night.  When I found out I would be getting a screener for Antboy I knew it would be perfect for movie night.  The movie starts off by showing some comic strip type scenes.  I'm sure you know my boys LOVED this!  Comics and super heroes are 2 of their favorite things.  We then jump into the movie where Pelle dreams of being something more.  This is all made possible when he is bitten by a special Ant that takes him from ordinary to extraordinary.  With the help of his friend Wilhelm learns all about his new super powers.  My boys have seen a lot of super hero movies, but this one was aimed directly at their age group!  A young school age boy who gets to be what every other little boy wants to be... A SUPER HERO!  The story line was a lot of fun and I only had to push pause for one potty break!  Do you know how hard it is to get a 3 and 6 year old to sit down for an entire movie!?!?!  The movie has to be pretty good to hold their attention.
I was trying to think of one word to describe this movie and after a lot of debate I would have to say "charming."  The story line does remind me of Spider-man, but its told in a way that my kids can really get into it and enjoy it.
In my personal opinion I don't think an adult would enjoy seeing this movie alone, but with a little one its worth seeing!
Runtime: 1 hr 17 min
Opens: Apr. 16, 2014
Click here to watch the trailer