Disclaimer:  I was given products in this post for review.  I was not paid in anyway to write this review.  All opinions are my own. 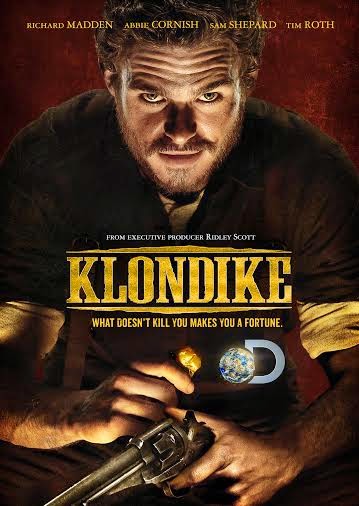 Let me start off by admitting I agreed to review this because Rob Stark was in it...  Well okay the guy who plays Rob Stark.  Yes I love Game Of Thrones and will watch a movie just to see more of my favorite actors.  With that being said I'm glad I agreed to review this, the series was incredible, the acting was astonishing and the story line was extraordinary!

I have now watched it twice and over the weekend I have lent it out to family for the 4th time.  Everyone loves it :)

A two-disc set, the Blu-ray and DVD also features exclusive cast interviews, behind-the-scenes looks and a special addition entitled Discovering Klondike that explores the fascinating history of Yukon’s gold rush and how it was brought to the screen for Discovery Channel’s Klondike.

SYNOPSIS
Based on actual events, Klondike tells the story of the last great Gold Rush in history. In 1897 two friends make the perilous journey through North American wilderness to the Klondike boom town Dawson City, "The Paris of the North" where murder, revenge, riches and redemption await.