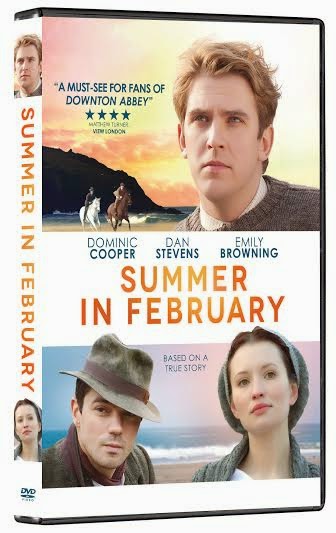 Fellow Downton Abbey Fans for those of you who were as heartbroken over Matthew as I was I have some great news!  On August 12 2014 Cinedigm (NASDAQ: CIDM) and Tribeca Film are release Summer in February!  And Dan Stevens happens to be playing one of the main roles!
I will be honest when I was contacted to review this movie I seen the cover with him on and before I read the synopsis I said yes!

A sweeping romance set at a bohemian artist colony on the picturesque coast of pre-war England, Summer in February is based on the true story of painter Sir Alfred Munnings (Cooper) and his blue-blood best friend Gilbert (Stevens). Munnings rises to become one of the premier artists of his time, winning the affection of beauty Florence Carter-Wood (Browning). But when Gilbert falls for Florence as well, a love triangle emerges with tragic consequences.

My review:
I like a certain type of love story.  I don't like ones where everything is rainbows, butterflies and everything is easy.  Its fair to say I like a little drama with my love stories.  Summer in February is my type of perfect love story.  Filled with drama, betrayal, conflict and of course love.
Adapted from the book by Jonathan Smith, Summer in February is set in an England, 1913, as the world is heading to war.  When two friends fall in love with the same girl their life also seems to be heading into a love triangle war.  The fact it was based on a true story made it all the better, because I couldn't wait to see how it turned out.  I thought for sure I would hate Florence, I normally do hate the girl leading on two men.  But in Summer in February I find myself unable to hate her and if anything sympathizing with her situation.