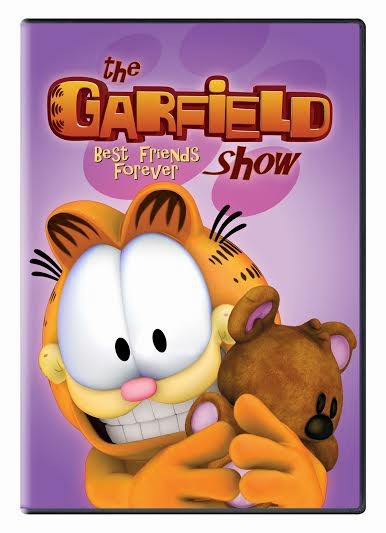 Every Sunday my boys and I fight over the paper.  I want the weekly coupons and flyers and they want their comics page.  The second they get their comic page they turn right to Garfield!  There is just something about that chubby orange cat :).
I have to smile, because rewind 18 years ago and I was doing the same thing!  Pesting my dad to pull out the comic page so I could see Garfield and my other favorite Peanuts.

My kiddos were excited when I told them we would be able to review a Garfield DVD!  They were astonished that their beloved comic was also a cartoon.

Based on the iconic American comic strip, THE GARFIELD SHOW premiered on Cartoon Network in 2012. This CGI animated series is led by executive producer and Garfield creator Jim Davis. Garfield has seen over 35 years of success as a world famous cartoon, starring in two feature films and millions of products!

Synopsis: Laughs are a cat’s best friend! Where he goes, fun and great times are sure to follow—along with his group of hilarious pals. Join Garfield’s furry adventures in these six animated episodes from the sidesplitting hit series. Whether he’s chasing mice, being blamed for Odie’s blunders, searching for his favorite teddy, or helping the neighborhood critters avoid a new dog-catching robot, Garfield guarantees a good time!
Episodes included: A Game of Cat and Mouse
Little Yellow Riding Hood
Nice to Nermal,
Out on a Limb
The Last Word
T3000.