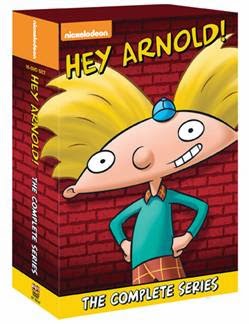 I was growing up when Hey Arnold! was really popular, it was one of my favorite shows.  Arnold was everyone's favorite football head lol
I don't remember all of their names, but remember the kid who was always standing behind Helga breathing really heavy to this day whenever my hubby is trying to concentrate on something I go up behind him and impersonate that kid :)

About the DVD:
On August 19th, 2014, Shout! Factory will release Hey Arnold! The Complete Series, a 16-DVD box set featuring all 99 episodes  from the classic Nickelodeon animated series.
Life in the city is one big adventure for Arnold and his friends. Our favorite football head lives with his grandparents, who run the Sunset Arms boarding house, Arnold shares a roof with a diverse and unusual menagerie of characters (including his pet pig!).
Everyone is back in this box sex!
Storyteller Gerald, class jinx Eugene, sometime-bully Harold, and the tomboy Helga.
Hey Arnold! features an all-star voice cast, including Dan Castellaneta (The Simpsons), Francesca Smith (Recess), Toran Caudell (Recess) and Jamil Walker Smith (SGU Stargate Universe). Created by Craig Bartlett as a comic in 1986, Hey Arnold! debuted as an animated short for the Nickelodeon film Harriet the Spy in 1996. Hey Arnold! went on to air on Nickelodeon from 1996 to 2001. The show also aired on "Nick on CBS" from 2002 until 2004.
Walmart Link


My review:
As I said, I was a Hey Arnold! fan growing up, so I knew I liked the show.  The box set is nice, because all the episodes are together.  Plus it doesn't come on TV anymore so this was a perfect way to share Hey Arnold with my kids.  Re-watching the episodes was a lot of fun and at some points I couldn't stop laughing.  I remember as a kid watching this with my brother and sister.  I couldn't believe I actually forgot about the pet PIG!!
Hey Arnold is a good clean show for kids.  And if you grew up when I did and seen these are they were airing on tv I promise you they are just as funny the 2nd time around!