Diclaimer:  I was given products in this post for the purpose of review. I was not paid in anyway to write this review.  All opinions are my own. 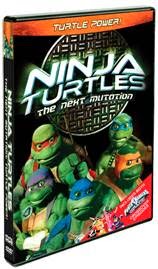 My boys are 3 and 6 and Turtle Mania has already taking over our house.  We have turtle bed sheets, turtle costumes, turtle swords, turtle shells, turtle masks, turtle games, turtle movies, coloring books and so much more!  And guess what....  This mama doesn't care, because I've been a long time Turtles fan!  Through the years they have changed quite a bit in appearance, but the story line of mutated turtles saving the day the has always been the same.

Now we do have quite a few turtle movie generations in my house!  We have the really old movies and cartoons, we also have the ones that released a few years ago and now my kids watch the new ones that are currently on TV.  We plan to see the new movie ASAP!  When I was contacted to review the new DVD Ninja Turtles: The Next Mutation I thought for sure I would have to turn them down since we most likely already have it.  Imagine my surprise when I realized it was just released and that my family has never had the chance to see it before.
I'm sure you know I had 2 excited little boys the day the package was delivered!  And of course we order a pizza, what is the Turtles without an extra cheese pizza :)

In Ninja Turtles: The Next Mutation – Turtle Power, everyone’s favorite turtles — Leonardo, Raphael, Donatello and Michelangelo, along with the newest addition to the family, Venus Di Milo — are back! They’re on a mission to rescue Master Splinter from the evil Dragon Lord and his horde while staying clear of other new foes like the vampiress Vam-Mi, the yeti Silver and the big-game hunter Simon Bonesteel who are all out for their shells! Ninja Turtles: The Next Mutation – Turtle Power contains six episodes from the live-action series, as well as the special Power Rangers In Space crossover episodes “Save Our Ship” and “Shell Shocked” as a bonus feature!

And yes you read right there is a Power Ranger crossover episode!!  How have I've never seen it before.
As always the Turtles deliver great entertainment good clean action and a story line that will never get old.
Shout Factory
So I have to ask who is your favorite Turtle?
I was and also will be a Michelangelo fan :)