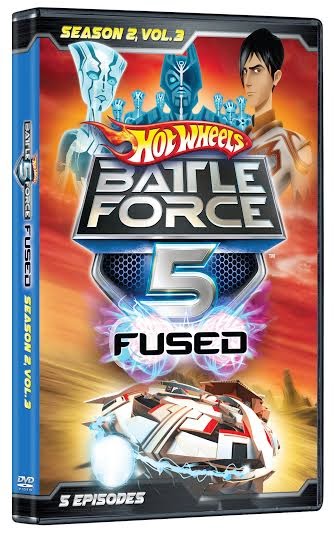 I have 2 little boys and they happen to think Hot Wheels are awesome.  My poor feet after stepping on 1000 times are not huge fans....  But you know the hall does make the best runway for a race lol
Needless to say the Hot Wheels Battle Force cartoon is a hit with my boys.  They get to see one of their favorite toys are the screen :)
Grab a seat for episodes 11-20 of HOT WHEELS BATTLE FORCE 5: FUSED SEASON 2! Cinedigm is releasing HOT WHEELS BATTLE FORCE 5 FUSED SEASON 2 VOLUME 3 and VOLUME 4 on DVD on September 16th. The complete series is also available on DIGITAL PLATFORMS. HOT WHEELS BATTLE FORCE 5: FUSED is a rocking series with high stakes, fast action, and really, really cool cars. HOT WHEELS: BATTLE FORCE 5 is based on the best-selling toy car franchise from Mattel.

Since 1968, Mattel has produced 4 billion toy cars; helping maintain Hot Wheels® as the #1 vehicle property in the U.S. HOT WHEELS BATTLE FORCE 5: FUSED is distributed by Nelvana Enterprises. Synopsis: Battle Force 5 is a team of heroes, led by Vert Wheeler and their Blue Sentient Mentor, Sage. The team works covertly, pretending to be mechanics who build and test high-performance vehicles in their garage, but when the call to action comes the Battle Force 5 must race to protect Earth and the Multiverse from alien domination. 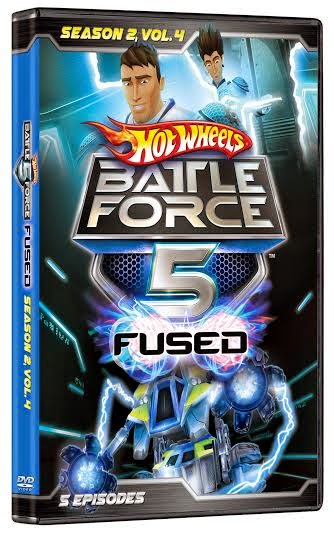 Season 2 features Vert Wheeler and his team as they race against the clock to find the Battle Keys. Meet characters like Stanford, Agura, Sherman, Spinner and Zoom and watch them drive their incredible cars like the Saber, the Buster, the Tangler, the Chopper and the Reverb. Using their cool cars and high-tech gadgets, they combat aliens and robots in the Battle Zones, the gateways between the worlds. See these teen drivers fight to protect the Earth from evil forces like the Vandals, the Sark and the Red Sentients led by villains such as Kalus, Zemerik and Krytus who are bent on total annihilation.