Sabrina - Secrets of a Teenage Witch: A Witch and the Werewolf - The Movie review


Sabrina - Secrets of a Teenage Witch: A Witch and the Werewolf - The Movie review 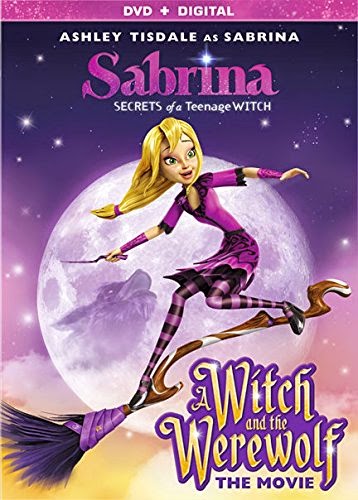 I grew up watching Sabrina, the real people version with Melissa Joan Hart.  I always loved the story of a half witch half human trying to navigate her way in the world and appear "normal."   Salem's mischief always added extra fun :).
When I discovered there was a new cartoon version of the show I was excited!  Not just for my kids, but also for myself.  I also found out the show airs on the hub, so I will be looking for episodes to enjoy with my little guys.

Sabrina - Secrets of a Teenage Witch: A Witch and the Werewolf - The Movie, arrives on DVD (plus Digital) and Digital HD September 9th from Lionsgate Home Entertainment.

Based on the hit Archie comic book series, Sabrina - Secrets of a Teenage Witch: A Witch and the Werewolf.
The Movie follows the charming Sabrina Spellman (Tisdale) who leads a double life as both a klutzy high schooler and superhero sorceress.  Everyone’s favorite half-human, half-witch, is back in a magical movie adventure filled with spells, excitement and tons of fun. When a magic jacket turns Sabrina’s friend Harvey into an uncontrollable werewolf, Sabrina’s off on a wild chase between the human and witch worlds to stop his rampage. Join Sabrina on her bewitching escapade to find a cure and save the day!

DVD SPECIAL FEATURES Cast My Spell on You” Music Video