Just so everyone knows its taking everything I have right now not to throw my hands in the air do an evil laugh and scream IT'S ALIVE!!
I am pretty excited about the next two items in my holiday gift guide, but first I must make a bad mommy confession.  I am a little weird.  Creepy stuff is around my house year round.  I don't see a black candelabra as Halloween decor I see it as a fun accent for my dresser.  I don't view black as a color to be avoided if it were up to me every inch of my house would be black, red and white.
To heck with movies like the Notebook and Titanic, I prefer Resident Evil, Underworld and Dracula.  In my house my hubby is the one watching Total Divas as I'm watching Game Of Thrones for the 100th time.  This mama refuses to be what is thought to be normal :)
I'm weird and I love it.  Zombies, vampires and shapeshifters ect isn't creepy to me its fascinating :) 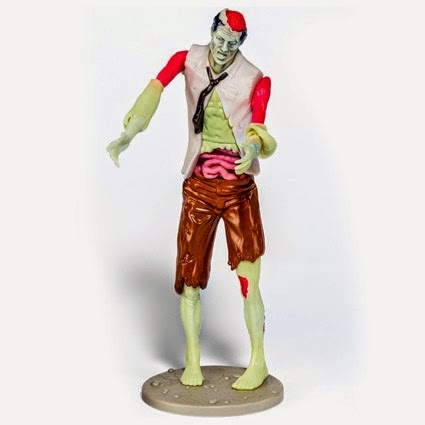 The dead are walking, and it’s up to you to solve the mystery and stop the zombie epidemic. Follow the clues by reading the short graphic novel and examining the squishy zombie model in a race against time and contagion. Look for bite marks, examine rotting flesh, and probe squishy organs to identify the origins of the zombie’s infection. The graphic novel written by educator David Hunter makes exploring the scientific method and the science behind diseases a lesson in zombie-based fun.

All I have to say is fun, fun and fun!!  My kiddos thought it was so cool that the flesh was removable and that they could feel the squishy organs and take them out.  The best part though was the mystery and trying to figure out what caused the out break.  The way the zombie looked added to the fun!  I can't say he looked life like, because well zombies aren't real...... BUT if they were I can definitely say I think they would look like this guy!  And don't worry about the kids figuring out the mystery and then becoming bored with the toy.  My kids had hours of fun pretend to infect their other toys!  This zombie though his parts are removable is pretty durable.  I literally watched him jump up over the back of my love-seat to attack a poor unsuspecting stuffed bear.  He then proceeded to run back my hallway (In Quinn's hand) screaming BRAINS I WANT BRAINS.  Was dropped, stepped on, slammed against a wall and still managed to go on :).  At which point and time he attempted to eat my cat, but I had to step in and save her.  Poor Jekyll all she wanted to do was play with her scratching post lol

The Inhuman Squishy Zombie is lots of fun and as I said my kids loved playing with him.
Now onto the next item I was able to review and the reason I wanted to scream IT'S ALIVE at the beginning of this post. 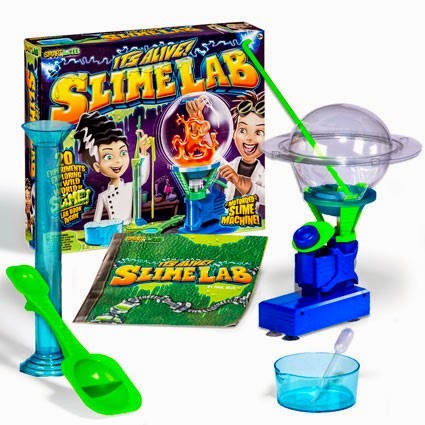 Measure, mix, and concoct icky-sticky goo like a real mad scientist with this one-of-a-kind laboratory kit. The motorized Slime-O-Nator makes your slimy concoctions appear to grow, dance, and mutate. Use the slime poker to stretch and bend your slime. Like all SmartLab toys, this goo-fy kit features projects that teach the science behind the fun. The 16-page lab book includes 20 slippery activities that use common household ingredients.

Everyone knows my kiddos had fun making slime creations.  I mean what kid wouldn't love to make their own slime and then get to mess around with it.  One of the things I liked was the fact they learned as they were playing.  There was a lot of science and facts involved in this hands on playing.  They were able to play as learning about chemical reactions, polymers, diffusion, gas expansion and so much more.  Brandon Jr absorbed it all and kept asking more questions and wanted to know more.  Quinn who is only 3 just wanted to play with the Slime, but I can see how this can start him on the path to develop a love of science.

Both toys were not only fun, but taught them things.  Even the zombie.  Until my son played with the zombie he didn't know what half our organs were called.  Now he does and he wants to learn more.   He wants to know how our heart works and how does our brain store memory.  What started off as a fun game of zombies turned into his sudden fascination with science!

Any little one is sure to appreciate either one of these under the tree come this holiday season.  And I'm sure any parent will like the learning and sudden interest in science that both toys provoke :)

These are only 2 of the amazing toys offered!  To learn and see more please click my link below:
SmartLab Toys