Disclaimer:  I was provide a copy on the products in this post for the purpose of review.  I was not paid in anyway to write this review.  All opinions are my own. 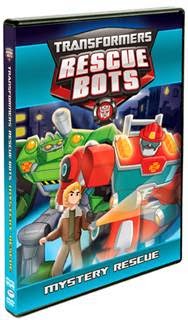 My boys are Transformer fans.  The fact its a "living" car is intriguing to them and its even better that they can battle and save the world :).  The show promote friendship and working together.  And even though I talk about them battling its never gory or over the top.  I let my 3 and 6 year old watch with out worrying.
I love the fact that they make the Transformer look "friendly"  to be honest I would almost call them adorable.  I don't have to worry about my 3 year old getting scared of them.  The story line moves at a quick pace which was perfect for 2 little boys with short attention spans.  They story was engaging enough that they couldn't look away.  After watching Transformers: Rescue Bots: Mystery Rescue all little kids are sure to have a few new heroes :)

The TRANSFORMERS RESCUE BOTS, CHASE, HEATWAVE, BLADES and BOULDER, are charged with the important task of protecting the town of Griffin Rock. Relying on their courage and friendship, these TRANSFORMERS are also aided by a family of first responders, chief among them is a young boy named Cody. This is a big task at the best of times, but even more so when uncovering the mysteries of Griffin Rock!

This mystery-themed collection of TRANSFORMERS: RESCUE BOTS will be released on DVD September 2nd, 2014 from Shout! Factory Kids, in conjunction with Hasbro Studios. Featuring five exciting episodes that the whole family can enjoy.

The small, happy town of Griffin Rock has a mystery on its hands. Make that FIVE mysteries! And it’s up to CHASE, HEATWAVE, BLADES, BOULDER and the Burns family to solve them. Do they have the sleuthing skills for the job? Join the suspense and the fun as Cody and the TRANSFORMERS RESCUE BOTS confront ghosts, search for the legendary Maine Ridge Monster, chase gremlins and more!
Executive produced by Jeff Kline (TRANSFORMERS PRIME), TRANSFORMERS RESCUE BOTS features the vocal talents of LeVar Burton (Star Trek: The Next Generation), Lacey Chabert (Party of Five), Steve Blum (TRANSFORMERS PRIME), Maurice LaMarche (Emmy® Award winner for Futurama) and the legendary Peter Cullen who voices OPTIMUS PRIME when he makes cameo appearances in the series. The TRANSFORMERS RESCUE BOTS series is currently airing on The HUB TV Network in the U.S. and on Treehouse in Canada.

Episodes Include: Countdown
The Haunting Of Griffin Rock
Spellbound
Blame The Gremlins
Feed The Beast

As always the Transformers deliver an action packed adventure that has kids cheering them on.   The episodes are fun and colorful and my kids yet again enjoyed watching their favorite characters save the day by working together.
If you wish to learn more please see my link below: