One of my favorite authors just released a new book in her Maiden Lane series!


Falsely accused of murder and mute from a near-fatal beating, Apollo Greaves, Viscount Kilbourne has escaped from Bedlam. With the Crown’s soldiers at his heels, he finds refuge in the ruins of a theater garden, toiling as a simple gardener. But when a vivacious young woman moves in, he’s quickly driven to distraction . . .


London’s premier actress, Lily Stump, is down on her luck when she’s forced to move into a scorched theater with her maid and small son. But she and her tiny family aren’t the only inhabitants—a silent, hulking beast of a man also calls the charred ruins home. Yet when she catches him reading her plays, Lily realizes there’s more to this man than meets the eye.


OUT OF ASHES, DESIRE FLARES


Though a scorching passion draws them together, Apollo knows that Lily is keeping secrets. When his past catches up with him, he’s forced to make a choice: his love for Lily…or the explosive truth that will set him free.

I adore this series and after seeing Apollo in his sister book Duke of Midnight I couldn't wait for him to get his own story!
To purchase please see my links below:

Please enjoy the excerpt below!

He dropped his satchel and took up the shovel, sticking it into the base of one of the dead

bushes, striking at the root mass. The blade only went halfway into the soil, so he jumped with

both feet on the shoulders of the blade, driving it the rest of the way down. He could feel as the

blade sliced through the roots and he grunted with satisfaction. He’d spent part of the previous

night sharpening the shovel to do just that. Gingerly he began prying with the handle—too hard

a movement and he’d snap it, or worse, the iron blade itself. He’d already lost two shovels this

“You don’t mind if I continue?” he heard Miss Stump ask. “It’s just that I need to finish

He glanced up curiously at that, wondering at the worried line between her brows as she

stared down at her manuscript. Makepeace had said she couldn’t get acting work at the moment.

Perhaps this was her only means of making money.

He shook his head in reply.

“I’m only in the third act,” she said absently. “My heroine has gambled away all her

brother’s money because, well, she’s dressed as her brother.”

She glanced up in time to catch his raised eyebrows.

“It’s a comedy called A Wastrel Reform’d.” She shrugged. “A complicated comedy

because right now no one knows who anyone is. There’s twins—a brother and sister—named

Wastrel, and the brother has convinced his sister—her Christian name is Cecily—to pretend to

be he so that he might seduce Lady Pamela’s maid, and he’s engaged to her—Lady Pamela, not

She took a breath and Apollo slowly smiled, because against all odds, he’d understood

Miss Stump grinned back. “It’s silly, I know, but that’s what comedy is, really—a lot

of silly things happening, one after another.” She glanced down at her play, running her finger

down the page. “So Cecily, dressed as Adam—that’s the brother—has lost terribly at a hand of

suitor. Although of course no one knows that Pimberly is Fanny’s father, otherwise she wouldn’t

Apollo leaned on his shovel and cocked an eyebrow.

“Kidnapped at birth, naturally,” she replied. “But fortunately she has quite a distinctive

birthmark. Right here.” She tapped the upper slope of her right breast.
Apollo defied any man not to follow the direction of her finger. She had quite a lovely

breast, gently swelling above the severe square neckline of her dress and modestly covered by a

“Yes, well.” Her husky voice made him raise his gaze. Her cheeks had pinkened, but that

might’ve been the wind. “In any case, I’m writing a scene between Cecily and Lord Pimberly

in which Pimberly demands his money and Cecily doesn’t have it. And naturally he’s begun to

realize he’s attracted to her at the same time.”

She cleared her throat.

He nodded, messing a bit with his shovel to look as if he were still working. Actually, he

was beginning to fear that the blade was stuck in the roots.

Cecily—the sister dressed as her brother. “Do you judge a gentleman by his bits, my lord?”

She turned and placed her fists on her hips again, in the wide-legged stance. “Pardon me,

but I said chits.”

Turn. Her hands dropped. “And yet, ’tis still your manly bits we discuss.” She glanced at

He screwed his mouth to the side and reluctantly shook his head.

“Blast!” she exclaimed under her breath, bending to the paper. She scratched out

something and then froze, obviously thinking.

He wasn’t even pretending to work anymore.

She gasped and then hunched over her manuscript, scribbling furiously before

straightening, a gleam of triumph in her eye.

She tossed her head as Cecily. “Indeed, and would you know a chit should you see one?”

Now she was a baffled Pimberly. “Naturally.”

“Oh, my lord?” She turned her head and looked over her shoulder through lowered lashes

at the imaginary Pimberly, all daring flirtation. “And how is that, may I ask?”

“How does a gentleman of your unsurpassed perception differentiate a chit from a bit?”

And she batted her eyelashes.

was so silly, so utterly enchanting, that Apollo couldn’t help it: he threw back his head and 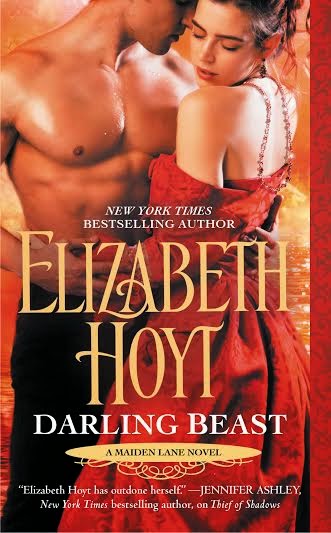 I can't wait to read the rest!  I was able to ask the lovely Mrs. Hoty a question :)

Q: I love your series all of them, what do you plan to write in the future?

I’m so glad you like my series! After Darling Beast comes two more Maiden Lane books. The first, Dearest Rogue, is about vivacious Lady Phoebe Batten and her dour bodyguard, Captain James Trevillion. Lady Phoebe needs a bodyguard because she is blind, but when someone starts making kidnap attempts on Lady Phoebe, Captain Trevillion has to decide how much he’s willing to risk to keep her safe. Dearest Rogue will be out May 2015. Fall 2015 I’ll have a yet unnamed Maiden Lane book with Asa Makepeace and a heroine who is introduced in Dearest Rogue.

My review:
As with all her other books Darling Beast does not disappoint.  I am only half way through the book and I have been on the edge of my seat the entire time.  Elizabeth Hoyt has a way of making readers laugh, fall in love and be angry all at the same time!  I find myself wanting so badly for poor Apollo to find happiness after everything he has been through and I giggle at the way Lily interacts with him.  Sometimes I feel bad for sweet Apollo the man doesn't stand a chance at keeping his heart!  He has been through so much it is heartwarming when him and Lily interact.  Lily may just be my favorite Hoyt female to date!  She is fun, strong, talented, a great mom and kind to others.
Apollo despite his huge size is gentle caring and very loyal to those he cares about.
The two of them together is, well, perfect :).
I love that we get to see a bit of past characters from the other books!  It is always nice to see how they are doing!

Oh and I feel the need to mention Indio and his pup!  With in the first few pages I could not stop laughing when he comes in to tell his mom a monster is in the garden.  I wont spoil it for anyone who has not had the chance to start yet, but I have a feeling you will all love what/who the monster turns out to be.

As with all Hoyt's books there is the fairy tale at the start of each chapter.  I look forward to these fairy tales as much as I do the book.

As I mentioned I am only half way through the book and I'm forcing myself to stop because my hubby is whining for me to shut off the light.

Darling Beast has strong personality characters, a great story line that so far is setting up to have a good twist, lots of mystery (Strange Dukes, framed murder and not knowing who Indio's father is), great character interaction and of course the writing is exquisite!

Then again I wouldn't expect anything less from an Elizabeth Hoyt book!  There is a reason she is in my top 5 authors :)

Want to win a copy of your own?  Please see the RC below: