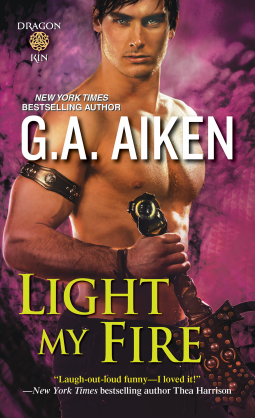 Synopsis:
Coming December 2, 2014
The trouble with humans is that they’re far too sensitive. Forget you put a woman in the local jail for a few months–and she takes it so personally! And yet she is the one trying to assassinate the queen. And now I’m trapped with Elina Shestakova of the Black Bear Riders of the Midnight…gods! That endless name! But what am I to do? I am Celyn the Charming with direct orders from my queen to protect this unforgiving female. Even more shocking, this unforgiving female is completely unimpressed by me. How is that even possible? But I know what I want and, for the moment, I want her. And I’m sure that she, like all females, will learn to adore me. How could she not when I am just so damn charming?

My fan moment:
Because yes I am a huge fan that I can help, but gush a bit about the author!
This is book 7 in the Dragon Kin series and also the 24th book I have read by the author.
She writes her Dragon Kin Series under G.A. Aiken and her other series under the name Shelly Laurenston, but no matter what name she is using the author is brilliant!
Her books have just the right about of action, hot love scenes and humor!  My favorite part about her books is the humorous dialog and situations her characters seem to get themselves into!

My hubby who normally yells at me to shut off the light when reading, instead is yelling at me to be quite when I have one of her books in hand.  I just can't stop giggling.
The first book of hers I read was When he was Bad.  Niles Van Holtz a wolf shifter fell in love with a human Irene.  The woman showed very little interest in him, but he couldn't take the hint.  And I mean really he couldn't he marked her as his mate and kept pesting the woman.  I remember the part where she went into her school office and the crazy wolf had put photos of himself on her desk.
It was so absurd that I busted up laughing in bed at 2am, my poor hubby who was in a deep sleep jumped up thinking something was wrong (He thought I was crying since I started to gasp for air)
After I calmed down enough to tell him the crazy wolf stuck his photo on her desk he all put ripped the book from my hand and told me to go the (BAD WORD) to bed.  Since that book I have purchased and read everything she ever wrote.  I even subscribe to her newsletters lol.
She has the power to write an amazing story that draws you in and wont let you go.  Her characters though at times can be crazy they make you laugh and want to keep reading more of their stories.
And don't worry I now forward my hubby when I am reading a Aiken/Laurenston book :)

My review of Light My Fire:
Celyn the Charming has appeared in a few other G.A. Aiken books, for those of you who have been reading the series Celyn is the one who fought with Eibhear over Izzy and well lost!
His mother is a Cadwaladr, sister to Bercelak (Dragon Queen's mate).  Anyone who knows the series understands just how crazy and blood thirsty the Cadwaladr Clan can be.

Light My Fire starts with a woman climbing to the Dragon's home to kill their queen.  Celyn who happens to be a Queen's guard of course stops the woman before she can even try.  Though we can see she wasn't trying very hard.
The woman who we learn is Elina is brought before the Queen and thinks she is about to meet death.  Which strangely and to Celyn confusion she is all to willing to accept.
The Queen takes pity on the little human, but knows her mate will kill her if he finds out why she came there, she tells Celyn to take her someone safe so she can be protected.
You know like a secluded cave, country cottage or even one of his 1000's of cousins house...

He takes her to jail.... and forgets about her.

Several months past and suddenly the human Queen Annwyl the bloody (Who is mated to the Dragon Queen's son and is the first to have half human/half dragon off springs) finds herself on the brink of war with those who follow the one-eyed god.
The best solution for her is to forge a treaty with the tribes that Elina (Queen assignor) belongs too.

When they tell Celyn to bring this woman to them he has no clue what they are talking about.  After some reminding he suddenly (and to everyone's horror) realizes he forgot her in jail.
He is sent to retrieve her and of course Elina is mad.  Though her time in jail was the easiest time in her life.

So our story begins and Celyn and the woman Elina are sent back to her people to arrange this treaty.
Elina anger at Celyn gives him the nickname Dolt and to his complete shock she seems to be immune to his charming ways.  She also is a woman of few words she his constant questions provided unless torment to her.  She also thinks all Southlanders or lazy and weak.  So the insults to Celyn just keep coming.

Celyn on the other hand can't help, but have a little fun himself and just never stops with the questions.  He drives poor Elina a little crazy, but with time they learn to get along and to both of their shock even start to like each other.

I don't want to give away to many details.  I am horrible with spoilers.
I will say there story had me laughing and at some points a bit in shock at what happens to Elina and how she been treated in life.

Another huge plus to the Dragon Kin series is we get to see everyone from the past books and it is a continuous story line.  This war has been a long time coming and we get to see it slowly unravel in each story.
I loved seeing my past favorite characters and knowing they were all doing good.  Most with their own children now!
Annwyl is still crazy, Bercelak is still mean and Gwenvael and Briec are still full of themselves!

I promise anyone who reads even one of G.A. Aiken's books are sure to fall in love and suddenly find themselves reading them all.
If you want to see an Excerpt from this title click my link below:
Light My fire Excerpt
Light My Fire is just as amazing, funny and action packed as every other book in this series
I can't wait for the next book!
To learn more or purchase click any of the links below:
G.A. Aiken Website
Barnes and Noble
Amazon