Disclaimer:  I was given product in this post for the purpose of review.  I was not paid in anyway to write this review.  All opinions are my own 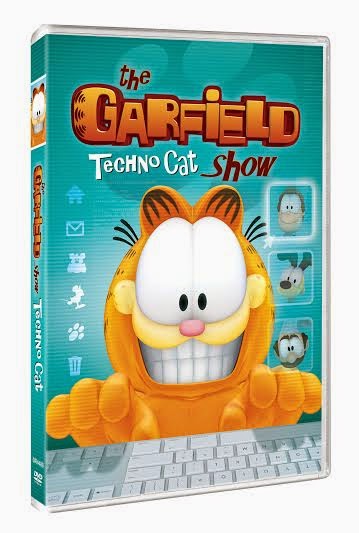 Who doesn't love Garfield?  This lasagna loving cat has been around for generation and has been making us laugh just as long.
I remember when I was little fight with my brother over the newspaper comic page.  I always read Garfield and Peanuts (Charlie Brown)

It is no surprise to me that years later Garfield is still around!  My kids love reading his comics and watching his shows as much as I did!

Cinedigm is releasing THE GARFIELD SHOW: TECHNO CAT on DVD and DIGITAL PLATFORMS on November 4th. The release includes six episodes and a Bonus Short!

Based on the iconic American comic strip, THE GARFIELD SHOW premiered on Cartoon Network in 2012. This CGI animated series is led by executive producer and Garfield creator Jim Davis. Garfield has seen over 35 years of success as a world famous cartoon, starring in two feature films and millions of products!

Synopsis: Garfield loves his technology! Whether it’s watching television or exploring programs, Garfield and his friends are always checking out the latest gadgets and getting into trouble with one device or another!  In these fun episodes Garfield as always is being naughty!  Between confronting a digital mailman, battling the cable company and trying to help Jon with cyber issues Garfield as always makes a mess of things :)
Episodes:
Cyber Mailman
Depths Of a Salesman
Night of the Apparatuses
Land of Hold
True Colors
Mind over mouse

For those of you who don't know right now Garfield is on Cartoon Network!  My kiddos and I love watching him and his friends :)

Garfield and his friends are just as funny and heartwarming now was they were 15 years ago when I was a kid!