This post is part of my 2014 Holiday guide! Over the next few weeks I will be posting amazing companies, recipes, deals and so much more to help make your holiday easier, fun and exciting. If you wish to learn more or see all the other great holiday content please click the photo above to be taken to my Holiday Guide home page.
History Presents: The Definitive WW1 And WWII Collection 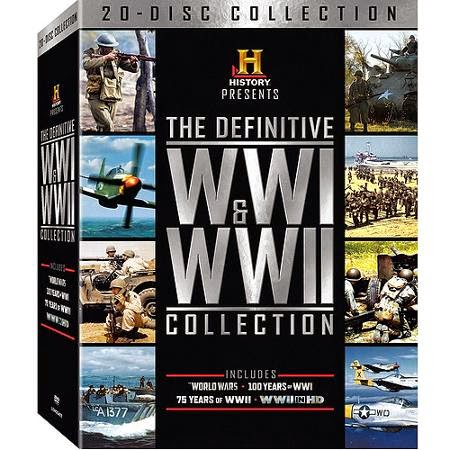 My family is really into history.  We live in PA and since I was a little girl I remember going to Gettysburg every single year.  The only year I missed was 2010 when I was pregnant with Quinn and having a really rough time.
Besides that year, we have been there every year and we are already planning our 2015 trip.  We are thinking of going in the Spring and doing the horseback tour.
Sadly for my hubby he is not that much into history and he is surrounded by us lol.

And yes I totally have several things auto-tuned on the History channel.  A few weeks ago I think I gave him a stress attack on football Sunday when the channel suddenly turned to H2 and one of the Clash of Gods episodes and again a few nights later when The Third Reich: The Fall suddenly came on.

My family (besides my hubby) is into history.
When I was asked to review History Present: The Definitive WWI and WWII, I honestly had to debate with myself should this be a self gift or should I give it to someone in my family??
In the end I choose to give it to my dad his B-Day was just a few weeks ago, so it arrived at the perfect time!

Synopsis:
Hitler. Mussolini. Patton. De Gaulle. MacArthur. Before they were giants, they were infantrymen and privates in the "war to end all wars." Binge-watch the History Channel Mini-series which originally aired across three nights all at once. This is the story of these devastating three decades of war, through the eyes of the men who were forged in the trenches and came to command a world on the brink of disaster.
Discover how the First World War changed the face of battle forever, from hand-to-hand combat to high-tech warfare, in "history of WWI: The First Modern War". Experience the acrobatic encounters of flying aces high above the battlefield in "Dogfights". Watch the Normandy assault in spectacular high definition in "D-Day" in HD, and learn soldier's personal stories in "WWII" in HD and "The Color Of War". Learn which inventions decided the war in "Ultimate WWII Weapons", and get a dramatic view of U.S. General George Patton's brilliant strategy in "Patton 360". And, witness the whole devastating three decades of war through the eyes of the men forged in the trenches of WWI before commanding the world in WWII - Franklin Roosevelt, Adolf Hitler, Winston Churchill, Joseph Stalin, and others - in the Emmy(R) nominated miniseries "The World Wars" Truly an unforgettable collection.

Now at 44 hours we still didn't watch it all, we have been watching it in sections.  So far we LOVE it and I actually remember watching some of this on TV before!

If you are into history and WWI and WWII are your thing this is a must have collection.  See the wars as you never have before.
It will be available in several locations tomorrow for purchase I looked around and found Walmart and Barnes and Nobles to offer the best price so far.
Barnes and Noble
Walmart
Or you can purchase right from The History Channel:
History Presents: The Definitive WWI and WWII