Disclaimer:  I was given products in this post for the purpose of review.  I was not paid in anyway for this review all opinions are my own. 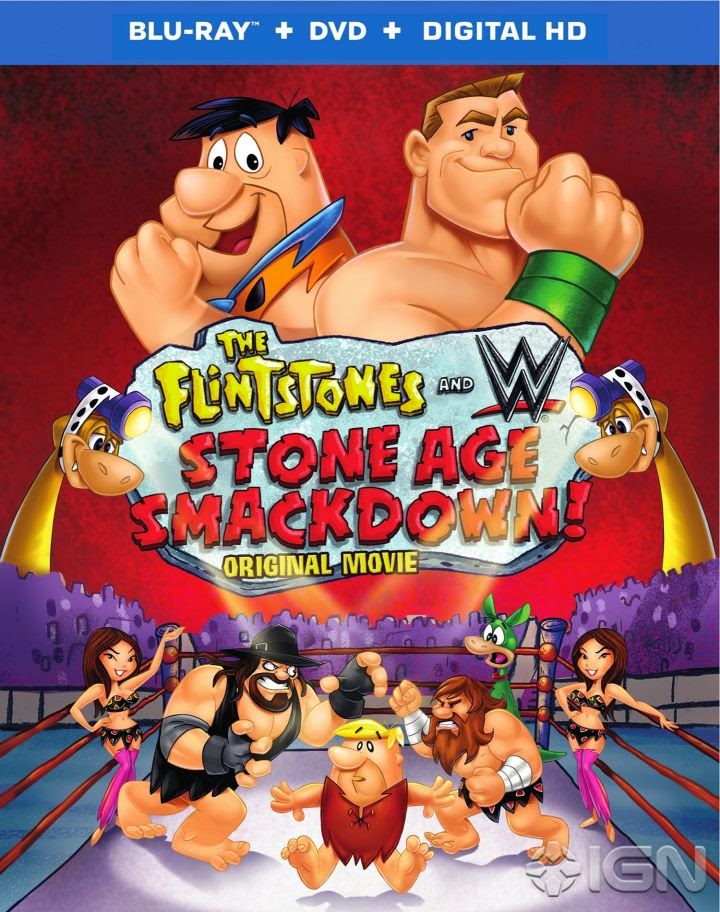 Synopsis:
Get ready for some raw-kin’ action in this all-new, original movie that brings some of WWE’s toughest, wildest superstars to Bedrock! When Fred loses his family’s vacation money, he hatches one of his hair brained plans to get it back. It’s a sports entertainment spectacle that involves throwing his best bud, Barney into the wrestling ring with the likes of John Cenastone (John Cena), Rey Mysteriopal (Rey Mysterio) and even The Undertaker, with Fred himself as event promoter! The crowds roar, the “clams” are pouring in from ticket sales and even Mr. McMagma (Vince McMahon) is taking notice of all the hoopla. Can Fred keep serving up bigger and badder matches or is he in for the rocky ride of his life? Including all-star appearances from The Boulder Twins (Brie and Nikki Bella) Marble Henry (Mark Henry) and Daniel Bry-Rock (Daniel Bryan), it’s time to get the whole family together for a collection of hard-hitting, side-splitting laughs from the most epic event in all of prehistory!
Own it on Blu-ray™ Combo, DVD & Digital HD March 10

My review:
Growing up I watched the Flintstones and the Jetsons religiously!  A day didn't pass that I wasn't watching them and later I even watched that cute cartoon where it showed the Flintstones as kids!
Sadly I can never find the show on TV to share with my kids, so their Flintstones viewing is limited to my Christmas specials.
So when I was contacted to review The Flintstones & WWE: Stone Age Smackdown I knew I HAD too!!
It is the perfect combination of old and new I get to see my beloved Flintstones and my kids get to watch their favorite WWE stars as cartoons!  You have no clue how many times a day I hear one of my boys yell "I AM CENA" and it is normally followed by a pillow getting wrestled into submission.  The show itself was awesome, Fred yet again has gotten the family into a bind that threatens to ruin the family vacation.  Instead of telling Wilma he plots and comes up with some sort of get rich quick scheme.  We even get to see cartoon Danial Bryan yell YES YES YES!!

So the plotting begins and next thing we know the WWE is putting on a wrestling show, the likes we have never seen before.  Sadly Fred being Fred goes and messes it up again and poor Barney as always is the voice of reason.

My only issues was some of the voices were different from what I remember, not that it was a big deal to my kiddos since they had no comparison.  Also a little of the animation was different, again no big deal my kids didn't notice.

We LOVE The Flintstones & WWE: Stone Age Smackdown it was the perfect combination of old and new making TV magic :)