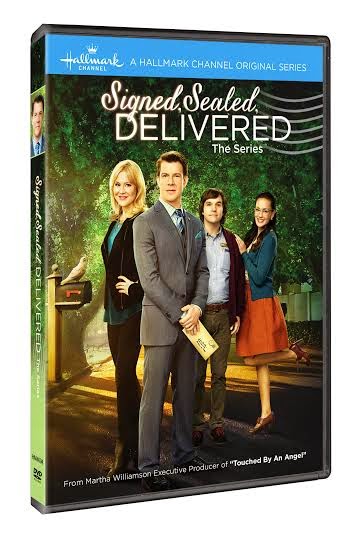 My mom has adored this show from the very beginning.  She continually begged me to watch it with her, but sadly being a horrible daughter I never got the chance to watch with her.
It wasn't until I was asked to review the series that I knew I would be able to make it up to her.  So over the weekend I made her up a huge "I'm sorry" movie basket with candy, popcorn, soda and other goodies.  Than I gave her Signed, Sealed, Delivered: The Series and a coupon (homemade of course) for 2 hours of no excuses given watch time :)
5 1/2 hours later I couldn't stop watching!!!  I had to force myself to stop and go relieve my hubby from kid duty!
I love this show it is heartwarming, the story draws you in and doesn't let you go and you find yourself unable to look away.
I love the acting and the constant feeling of hope!  The plot keeps you interested enough that it never becomes boring.
I thought for sure after a few "solved" undeliverables the plot would repeat itself.  It never did each story was fresh and had me hoping for a happy ending!
It is a inspiring show for the entire family.

Handwritten letters change lives in the popular, award winning drama, Signed, Sealed, Delivered: The Series.
Starring Eric Mabius (“Ugly Betty”), and featuring must-see appearances from special guest stars, including Carol Burnett (“The Carol Burnett Show”), Della Reese (“Touched By An Angel”), Valerie Harper (“Rhoda”), Valerie Bertinelli (“Hot in Cleveland”), and Marilu Henner (“Taxi”), it’s easy to see why Entertainment Weekly called the series “an instant classic.” Signed, Sealed, Delivered: The Series is a wonderful combination of romance, comedy and drama for the whole family. The ten one-hour episodes follow four postal workers, the Postables, who transform themselves into an elite team of Dead Letter detectives to track down intended recipients of undelivered mail. Their missions take them out of the office and into an unpredictable world where redirected letters and packages can save lives, solve crimes, reunite old loves and change futures by arriving late but somehow on time. The team includes the group’s leader, charming Oliver O’Toole (Mabius), a man of faith who upholds traditional values in his life and work; Shane McInerney (Kristin Booth), a technophile who brings 21st century sensibility to the group; free-spirited, “girl next door” Rita Haywith (Crystal Lowe) who has a photographic memory; and lovable Norman Dorman (Geoff Gustafson), a master in conventional research methods. By the end, it becomes evident that the missions of the POstables aren’t just making an impact on the lives of others; they’re being changed, too.