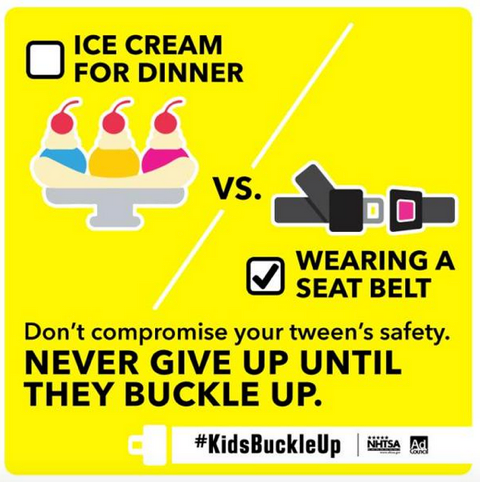 Did you know that one child passenger age 8 – 14 is injured every 8 minutes in a car crash?
From 2009 – 2013, 1,522 kids ages 8-14 died in car, SUV and van crashes. Of those who died,
almost half were unbelted.  As children get older they’re sometimes less likely to buckle up.
The percentage of child passengers who die while riding unrestrained generally increases with age
and is most pronounced among 13 and 14-year-olds regardless of seating position.

Buckling-up is an important habit to instill in children at a young age. Parents can lead by example by wearing a seat belt themselves and by insisting on seat belt use for every passenger in their vehicle. Seat belts and safety seats, if used correctly, dramatically reduce the risk of fatality or injury to children.