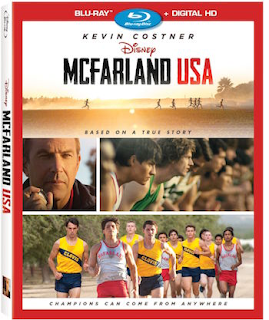 Channel your inner champion and brace yourself for this inspiring adventure based on a true story of underdogs triumphing over tremendous obstacles in McFarland USA on Disney Blu-ray Combo Pack, Disney Movies Anywhere and Digital HD June 2nd! This moving story features Kevin Costner (“Dances with Wolves,” “The Untouchables), Morgan Saylor (TV’s “Homeland”) and Diana Maria Riva (“NCIS: Los Angeles,” “Castle”) amongst others in this touching tale displaying the power of family, commitment and work ethic that transforms a cross-county team into champions. Bonus features include McFarland Reflections, deleted scenes, extended scenes and more!

The movie starts with Jim White a football coach angry at his team for a less then stunning half.  In his temper he throws a shoe that accidentally hits one of the players in the face.
This incident forces him to load up his family and move, he suddenly finds himself in McFarland CA.
McFarland is a far cry from what him and his family are use to.  On their first night there a family dinner gets turned crude do to some of the locals.
Than again at a football game him and the head coach argue over the well being of the players.
McFarland doesn't seem like such a great place to live and raise a family.

During a PE class he notices that some of the boys are very fast, fast enough to even run in competition.
He forms a plan to start a cross country team, with the Diaz brothers as his first "runners."

He recruits several more members and through out the movie we see our stars face and overcome problems.  Jim goes above what any other coach would to help his team not only be better athletes, but also better people.

They qualify for the first round and move up in the cross country competition. 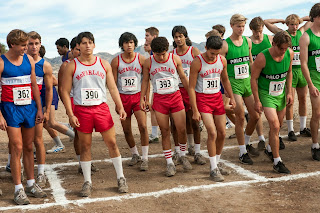 After seeing the skill of his runners Jim is approached to take a full time position.  He considers and when his team and family find out they are upset with him.  His family because they feel settled in their new home and his team because he promised to make their lives better.
The team does make it to the finals and Jim seems the support from the community as they come to watch.

I don't want to give away the ending just know it is heartwarming and has all the magic that Disney movies promise.
Jim and his players face difficult decisions and issues, that they always seem to overcome them.
This is a true underdog story that is sure to let everyone feeling good.  I loved the interaction between not only the coach and players, but also the community as a whole.
The scenes were true and filled with feeling without being overwhelming and feeling forced.
Jim inspires to make the best of what you have and to never give up no matter how dire a situation seems.