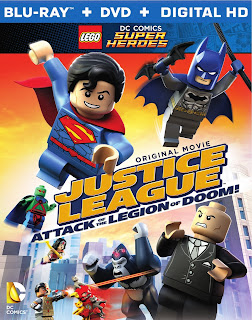 Legos + Super Heroes + Cartoons = Happy Little Boys
Any one of those things will put a huge smile on my boys' faces, all three at once is sure to have them cheering.
And the all new Lego DC Comics Super Heroes - Justice League: Attack of the Legion of Doom does just that.

THE FATE OF THE JUSTICE LEAGUE HANGS IN THE BALANCE AS WARNER BROS. HOME ENTERTAINMENT
AND THE LEGO GROUP RELEASE
LEGO DC COMICS SUPER HEROES:
JUSTICE LEAGUE: ATTACK OF THE LEGION OF DOOM!
ON BLU-RAY COMBO PACK, DVD and DIGITAL HD,
AUGUST 25, 2015

Crime is on the run as the newly formed Justice League keeps Metropolis safe and this makes evil genius Lex Luthor very unhappy. Together with Black Manta, Sinestro and a gang of ruthless recruits, Lex builds his own league and declares them the Legion of Doom. With this super powered team of terror and a plan to attack the top-secret government site, Area 52, can Lex finally be on the verge of victory? Sound the “Trouble Alert” and get ready for the bricks to fly when Superman, Batman, Wonder Woman and the rest of the Justice League face off against the world’s greatest Super-Villains! It’s the next all-new original movie from LEGO® and DC Comics.

My review:
As I said putting Legos and Super Heroes together will always be a hit with my boys!  And to do that in the form of a cartoon??  What more could a little boy ask for?!?!
As with all the Lego Super Hero movies the graphics are awesome, and it was funny!  Even I laughed when watching.  There is a good story line.  Sometimes I have a hard time watching the same things as my kids, because it is all over the place.  Justice League:  Attack of the Legion of Doom, has a follow-able story line, so it was one of those cartoons that both parents and kids could enjoy watching together.
I love that so many of our favorite heroes are here and even our most notorious villains!
This is a huge hit for Lego and Super Hero fans alike!