THE ORIGINALS: THE COMPLETE SECOND SEASON

Disclaimer:  I was given products in this post for the purpose of review.  I was not paid in anyway to write a review.  All opinions are my own.


THE ORIGINALS: THE COMPLETE SECOND SEASON 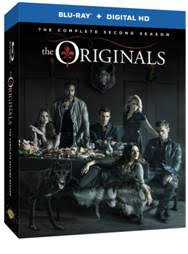 Before you start to read this review please note I will be mentioning things that happened this season.  If you have yet to watch season 2 and don't want to read spoilers please stop now!!

Warner Bros. Home Entertainment is excited to announce, THE ORIGINALS: THE COMPLETE SECOND SEASON including all 22 episodes from the second season plus never-before-seen featurettes and much more will be available on Blu-ray and DVD on September 1

If you are ever worried that your family has issues sit down a watch a few episodes of The Originals.  Where brother Klaus has a tendencies to put his siblings in coffins for timeouts.

As Original vampire-werewolf hybrid Klaus Mikaelson returned to the vibrant, supernaturally charged city of New Orleans in season one, he was stunned to learn along with his siblings Elijah and Rebeka that Hayley, a werewolf, was pregnant with his child, and his vampire protégé, Marcel, whom the Original siblings had thought long dead, was ruling the French Quarter.
Soon, a bloody war escalated between vampires and witches  the stakes raised by powerful teenage witch Davina and by Klaus’s bond with Cami, a student with a painful past and a ruthless pack of wolves seized the opportunity to stage a violent coup. Now, in season two, a new status quo must be adjusted to, as the newly empowered werewolves control the city. Klaus struggles with weaknesses as Elijah desperately tries to save Hayley now a hybrid from a vicious spiral of self-destruction. Meanwhile, with the re-emergence of several Mikaelsons, “family is power” takes on new meaning.

With Blu-ray’s unsurpassed picture and sound, The Originals: The CompleteSecond Season Blu-ray release will include 1080p Full HD Video with DTS-HD Master Audio for English 5.1. The 3-disc Blu-ray will feature a high-definition Blu-ray and a Digital HD copy of all 22 episodes from Season Two.

SPECIAL FEATURES
•       The Originals: Always and Forever
•       In this featurette, we will hear from cast and creators on how season two explored new depths of what it means to be a family.
•       The Awakening Web Series
•       Explore this companion series on Kol Mikaelson (Nathaniel Buzolic) and his quest to form an alliance with the witches of New Orleans in 1914. Also, go behind the scenes with the cast and creators of the digital series.
•       The Originals: 2014 Comic-Con Panel
•       Come Visit Georgia PSA
•       Deleted Scenes
•       Gag Reel

Okay now onto the spoilers.
As with Vampire Diaries I watch each episode live on tv so for me the exciting part of the Blu-ray set was the extras.  I wish they could make an entire show from The Awakening!  So even if you watched the show on TV, like me, it is so worth buying the Blu-ray for the extras.

So season 2 leaves us in a much different place than season 1.  Klaus had to fake the death of his sweet little girl in order to protect her.  We have a gang of super wolves.  The witches are taking a stand, the vampires numbers have dwindled, a whole lot of body jumping, lovers die, weddings take place, old curses become new again, new foes surface, old foes return and Klaus....  Well Klaus does what he does best... kill people.
Faking his daughter's death means he can't see her, and even though he has a strange view on how to treat family this deeply hurts Klaus.  For anyone who seen him on Vampire Diaries you would think he was heartless, I truly think Klaus feels to much and loves to deeply.  So when he gets hurt he lashes out.  And he would do and kill anyone to protect those he loves.  Klaus has no issues with being the bad guy.
In this season his mother returns with the intent to take him down.  She also brings with her brother Finn and Cole.  Only thing is they are no longer vampires, now they are witches.  They aren't even in their own bodies, so it takes Klaus a bit of time to figure out who they are.
Finn is a whack job and as always does what ever mommy dearest asks him too.  He is on a righteousness path to undo all wrongs mission.  I really love the actor who played Finn though!  I have to say he NAILED the part :)
Klaus's mom wants to undo her wrongs of making the vampires and give them a 2nd chance at a monster free life.  She wants to do this by putting them into the bodies of witches.  She also tortures Elijah and we see a side to him we never knew about.
Cole in normal little brother fashion just wants to be a pain in the butt.  He plays both sides of the fence for awhile, but in the end helps Klaus.  Even though it cost him his life.  Him and Davina's love story was sweet though!  And I was happy he found love even if for a short time before he died.

Michael, Klaus's dad, returns and tries to take him down again. There is a kink in the plan though when his beloved daughter Freya returns.  His love for Freya out weighs his hate for Klaus.
Freya is a mystery and for most of the season I can't tell if she is evil or good.
Sadly she brings Dahlia with her.  An all powerful witch who wants baby Hope (Klaus's daughter) and her powers.
Most of the season is spent trying to take down Dahlia and stop her evil baby stealing plan.
Klaus has meant his match in Freya.  Even his all mighty hybrid power doesn't stand up to hers.
Klaus devises a plan to take her down.  Sadly in this plan he needs to hurt those he loves most.  Klaus will do whatever it takes though to protect baby Hope.
Kill Elijah's love, curses Hayley and her pack, ruin any chance Davina has to bring back Cole and betray everyone else.
There is no line Klaus isn't willing to cross.

The saddest part of season 2 was losing both Cole and Aiden.  When Cole admits that all he ever wanted was to be cared about by his family I will admit I cried.
Watching Josh lose Aiden also broke my heart.  As a gay couple and one being a vampire and the other a wolf the odds were always against them.  This was the one couple I really wanted to make it and prove love defeats all odds.
The best part of season 2 was when Dahlia lets go of her hate and crosses over with her sister.  Even though I hated Dahlia I can see how she became the person she was.  So even though I was happy to see her defeated I was also happy to see her heal.

And the funnest part is at Hayley's wedding when Klaus smiles over the fact he is planning to kill the groom at some point.  Only Klaus could get giddy over planning murder.

If you are into paranormal you need to watch The Originals.  Klaus alone will have you addicted!