THE VAMPIRE DIARIES: THE COMPLETE SIXTH SEASON Available on Blu-ray and DVD September 1, 2015

Disclaimer:  I was given products in this post for the purpose of review.  I was not paid in anyway to write this review.  All opinions are my own, 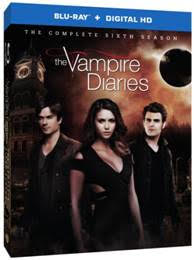 Stefan, Elena, Damon and Bonnie have been part of my life far longer than the TV series became a hit.  I read their stories years ago and LJ Smith use to be one of my favorite writers!  I even named my son Quinn after a vampire in her Night World Series.
When I seen advertisements several years ago that Vampire Diaries would be a TV show I couldn't wait!
Some of my favorite characters were about to become real.  I never expected to love the show this much though!  As an avid book reader it hurts me to say this..... BUT the show is even better than the books!!
Gasp!  Don't hate me LJ Smith fans I still love the books, I just love the show more (<3 Ian Somerhalder)
I really do love the show, I love all the added twist and turns.  I love that my favorite characters have more depth and back story.  I even love that book villains are now beloved TV show characters.
Okay for those of you whom never watched the show, or have fallen behind here is the quick note.
Two brothers, one girl.  Simple enough... No these brothers are vampires and the girl happens to be a doppelganger of a girl that was once the center of a catastrophic love triangle.
It doesn't stop there throw in some witches, werewolves, originals, hunters, gypsies and a few humans and you have The Vampire Diaries in a nutshell.
If you are a fan of the paranormal you need to be watching The Vampire Diaries.

Okay lets talk more about this season.  Even though I only just got the Blu-ray set last week, I can tell you all about it since I watch each episode live this year.

Contains All 22 Episodes From The Sixth Season Plus Two Featurettes, An Audio Commentary, The 2014 Comic-Con Panel, Deleted Scenes, And A Gag Reel

The Vampire Diaries continues its sixth season with more delicious drama to sink your teeth into. In season five, after a passionate summer with Damon, Elena headed to Whitmore College with Caroline, not knowing Bonnie sacrificed her life for Jeremy’s. Meanwhile, Stefan and Caroline’s friendship deepened as they stood up to the Travelers, a nomadic witch tribe driven to strip Mystic Falls of magic and cast out its supernatural residents. In the shocking season finale, Damon, fearing he would lose his loved ones on the crumbling Other Side, made a huge sacrifice to bring them all back — with catastrophic and heartbreaking results. Season six follows the characters’ journey back to each other as they explore the duality of good versus evil inside themselves. Matt Davis reprises his role as Alaric Saltzman, recently returned from The Other Side. Plus, the season will make you misty-eyed as the departure of a major character will turn lives upside down and leave us asking what happened to Mystic Falls.

Spoiler alert don't read if you didn't watch yet!

Okay now onto the spoilers!

At the end of season 5 we were all heart broken over the death of both Bonnie and Damon.  Little did we know at the time they didn't die, instead they got stuck in time where the same day repeats over and over again.  Step in Kai, psychopathy family murdering, magic stealing lunatic.
He has a way to get them all out, but Bonnie doesn't want to release that kind of evil into the world.  So she sends Damon through and stays behind alone with Kai.
Note to self never piss off a lunatic.  Kai doesn't take this well.
I love Bonnie she is always sacrificing herself for the others.
Don't worry though, her friends do get her out.... Eventually.
Elena who thinks Damon is gone asks Alaric to compel her to forget Damon, to make her forget she ever loved him.  Which kinda sucks for Damon when he comes back.
Caroline loses her mom to cancer <3.  Alaric becomes human and meets a hot witch doctor...  LOL She is a witch that happens to be a doctor.  And they are planning to have a baby and get married!!!
Sadly she also happens to be evil Kai's twin sister.  And in order for Kai to be all powerful he has to kill her and steal her powers.
I don't want to give away to much more, but I will tell you.  We lose some of our favorite characters this season.
We also get to see Caroline become a bad vamp.  And guess who comes back!??!?!  Stefan and Damon's mom!
And yes it is as exciting as it sounds.
Oh and of course Enzo is up to no good.  He is that one character you want so badly to love, but he just keeps doing stuff to tick you off :).
Jeremy breaks off from the group to do his own hunter thing.
Tyler falls for a cute witch.
Poor human Matt always seems to be in the middle of the chaos.
Stefan turns off his humanity for awhile.

And Damon who would do anything for Elena, shows us a different side to himself.  His new found friendship with Bonnie was my favorite part of this season!
At the end of the season there is a huge massacre where as I mentioned we lose some beloved characters.  But it also seems that the show jumps ahead of few years in the last minute.
I read an article too that we will be seeing some new faces on the show.
Oh and thank god Katherine I think my really and truly be gone!!

For those of you think well what is the point of buying the Blu-ray set if I already seen them on tv?  The extras are SO worth it!

Buy the Blu-ray and catch up because season 7 starts in October!