I will be given compensation to complete this post/giveaway.

Blah, Blah Blah!  I'm sorry I could not resist :).  My kiddos adore Hotel Transylvania 1.  We watched, rewatched and then watched it 50+ more times.  At this point in time I think my 4 year old can quote half the movie.
For anyone whom has yet to watch it DO IT NOW!  It is cute and I am 28 and love watching it with my boys.  So 2 thumbs up for being great for the whole family.
Not only is it cute, but it has great humor.  Stuff adults can laugh at without being vulgar for kids.

Oh and if you have seen part one get ready.... Because.... PART 2 IS COMING TO THEATERS REALLY SOON!

About the Movie:
Drac’s pack is back for an all-new monster comedy adventure in Sony Pictures Animation's Hotel Transylvania 2! 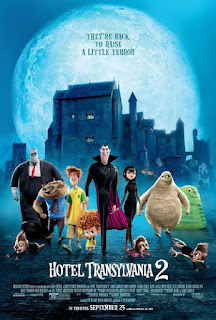 Everything seems to be changing for the better at Hotel Transylvania... Dracula’s rigid monster-only hotel policy has finally relaxed, opening up its doors to human guests. But behind closed coffins, Drac is worried that his adorable half-human, half-vampire grandson, Dennis, isn’t showing signs of being a vampire.
So while Mavis is busy visiting her human in-laws with Johnny – and in for a major cultural shock of her own – “Vampa” Drac enlists his friends Frank, Murray, Wayne and Griffin to put Dennis through a “monster-in-training” boot camp. 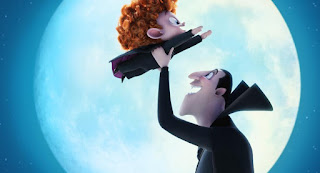 But little do they know that Drac’s grumpy and very old, old, old school dad Vlad is about to pay a family visit to the hotel.
And when Vlad finds out that his great-grandson is not a pure blood – and humans are now welcome at Hotel Transylvania – things are going to get batty! 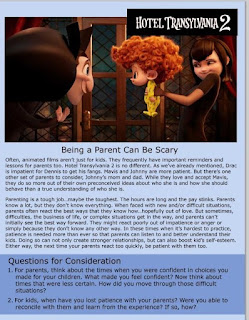 Okay for those of you bouncing up and down in your seats right now from excited I am about to rock your world even further!  Because you can win a Hotel Transylvania 2 prize package! 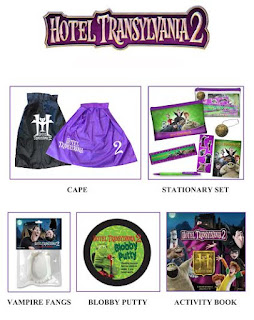 Only one entrant per mailing address per giveaway. If you have won the same prize on another blog, you will not be eligible to win it again. Void where prohibited by law. One person entering per household please. The Simply Me blog is not responsible for shipment of prize.