I was given products in this post for the purpose of review. 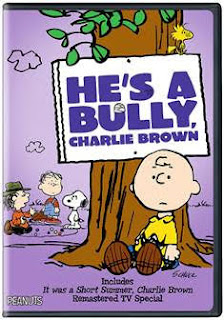 2015 is the first year my oldest son dealt with a real bully.  This boy would pick on my son non stop, steal his stuff and make fun of him.  It broke my heart as his mom to see him feel down and to start to doubt himself.
Don't worry dear readers, if nothing else I am that over protective mama bear and put it to a stop almost right away.  I made calls and didn't stop until something was done.  The thing was he did happen and my son was left feeling sad and questioning why someone would say and do those horrible things to him.
How as a mom do I tell him that it wasn't a flaw with him?  That the other little boy is just mean?   How do I tell him that everyone at some point in time gets bullied?  That no one is immune to this horrible act?
We talked and talked and talked.  My son started to feel better and then I told him how I was picked on my entire childhood not just at school, but also at home.
I didn't go into detail, something that happened are things I hope he never has to hear about.
When we were done talking I asked him if I seem happy.
He looked at me and replied "yes you are always laughing and doing fun things with Quinn and me."  I then smiled back at him and said "See bulling doesn't defeat you little buddy.  Life goes on. Don't let someone else take away your happiness."

He raised his little chin and nodded.  My son may have been a victim of a bully but it wasn't going to break him.

Important life lessons are learned by thePeanuts gang, on He’s a Bully, Charlie Brown available October 6, 2015 from Warner Bros. Home Entertainment. This heartwarming collection brings together two Peanuts specials that are paired with an episode of The Charlie Brown & Snoopy Show, that have been brilliantly remastered in all-new 4K Ultra HD transfers to DVD. In this must-own compilation, Charlie Brown is called upon to stand up for one of his pals, who is taken advantage of by a bully at summer camp.

With school out for summer, Charlie Brown and his pals set out for camp. Rerun van Pelt, Lucy’s youngest brother, brings his prized collection of marbles, which once belonged to his grandfather, Felix, an award-winning marbles champ. Rerun is determined to become a marble master just like his grandpa but first, he must find someone who will teach him how to play the game.

At camp, Rerun meets Joe Agate, a tough-talking and disrespectful older boy who takes advantage of Rerun’s naiveté and cons him out of all his grandpa Felix’s marbles. A devastated Rerun confides in Charlie Brown, who is so disgusted by Joe’s behavior that he decides to stand up to him, with the help of Snoopy as Joe Cool, of course. Will Charlie Brown summon the courage to face the awful Joe Agate and win back Rerun’s beloved marbles?

In It was a Short Summer, Charlie Brown, which is also featured on this release, it’s a hilarious battle of boys against girls, with Snoopy having to get in the middle of it all.  At summer camp, the Peanuts gang put up with poor food and the girls winning all the sports competitions. To get even, the boys challenge them to an arm-wrestling contest between Lucy and “The Masked Marvel” – aka Snoopy in disguise. Will the boys triumph or stay defeated?

“He’s a Bully, Charlie Brown, sends a powerful message. From time to time, we’re all faced with situations in which we have to be strong, courageous and stand up for what we believe is right,” said Mary Ellen Thomas, Vice President Family & Animation Marketing. She added, “We’re delighted to release this inspiring collection. If you love Peanuts, this is one title you won’t want to miss.”
I love the message it delivers.  I loved that my son got to see some of his favorite characters going through what he did.
No one deserves to get bullied.  He's a Bully, Charlie Brown delivers that message in a heartfelt way that will leave kids inspired to stick up for themselves and others who become the victim of bullying.