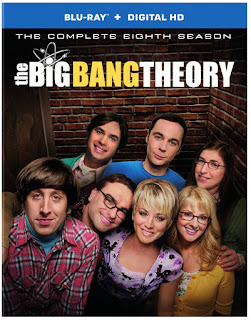 If you never watched an episode of the Big Bang Theory there must be something wrong with you!  Just kidding, but really if you haven't watched Big Bang Theory you have no clue what you are missing!  This show is funny without being vulgar.  The characters are all lovable and after a few episodes you will have yourself wishing that you had a friend like Sheldon.
Okay I have to share something about myself quick before I get into the review.  In my family room we have a chair, a couch and a small love-seat.  The love seat has my 3 favorite throw blankets, my 4 favorite pillows (That I arrange under my neck, head and feet) and it is angled just right for proper tv viewing.  It is mine...
So whenever someone sits there I stare them down and inform that they are in my spot.  If that doesn't work I mush myself up next to them until they become so uncomfortable that they move.
It has gotten to the point that if some one sits there my hubby will say, "Wait till little Sheldon sees you."  lol It is funny so I don't get mad, plus it is true.
So I only just got the Blu-Ray set, but since I watch Big Bang Theory every week with my dad (In my spot) I can write the review about the season :)

Now fans can relive all of the laughs of one of the best seasons to date when Warner Bros. Home Entertainment releases The Big Bang Theory: The Complete Eighth Season on Blu-ray and DVD September 15, 2015.  The set includes all 24 hilarious episodes plus all-new extras including 4 featurettes as well as the show’s 2014 Comic-Con panel in San Diego.

The Big Bang Theory: The Complete Eighth Season is also available on Digital HD.
The Big Bang Theory which was already renewed for two additional seasons on CBS  revolves around two genius roommates Leonard Hofstadter and Sheldon Cooper who remain socially challenged, but always produce hilarious results with their friends. With Leonard finally engaged to girl-across-the-hall Penny after countless proposals, the possibilities for happiness seem endless…while the probability for laughs is a foregone conclusion. What’s unknown is how this might impact the ironclad “Roommate Agreement” he’s entered into with Sheldon. Add to this, Sheldon’s uncomfortably close relationship with neurobiologist Amy Farrah Fowler; Raj’s newfound ability to talk to and date women; and Howard and Bernadette’s solution to an in-house caretaker (their friend Stuart) for the always outspoken Mrs. Wolowitz, and the worlds of science and sitcom are about to hilariously collide!


The Big Bang Theory: The Complete Eighth Season on Blu-ray and DVD includes 24 half-hour episodes:
The Locomotion Interruption
The Junior Professor Solution
The First Pitch Insufficiency
The Hook-Up Reverberation
The Focus Attenuation
The Expedition Approximation
The Misinterpretation Agitation
The Prom Equivalency
The Septum Deviation
The Champagne Reflection
The Clean Room Infiltration
The Space Probe Disintegration
The Anxiety Optimization
The Troll Manifestation
The Comic Book Store Regeneration
The Intimacy Acceleration
The Colonization Application
The Leftover Thermalization
The Skywalker Incursion
The Fortification Implementation
The Communication Deterioration
The Graduation Transmission
The Maternal Combustion
The Commitment Determination


Stop now if you didn't watch the season I am going to post some spoilers.

Okay as I said before I watch this show every single week with my dad.  So please excuse me if I get my seasons mixed up!  I may say something that happened in a different season.
Okay we start the season off with Sheldon returning, if you remember he left last season because he wasn't sure how things would be now with Leonard leaving him.  Sadly for Sheldon the train ride didn't go as planned and he gets robbed!  Poor Shelly :(
He calls Leonard to come save him.  This upsets Amy because she doesn't know why he didn't call her.  Sheldon tells Leonard he didn't want her to see him like that.  It was special because we get to see Sheldon have a real normal emotion.  Sadly he ruins it by claiming he knows Leonard sees him as some sort of all knowing god like man lol.  Okay maybe they weren't he words, but that is how he came off.
Raj can finally talk to girls, but seems to be dating quite the creepy chick.  She is into really scary movies, and I swear I think she wanted to get busy in a grave yard?!?!  He still has the weird relationship with his pup and really there wasn't much going on with him this season.  Oh his parents are splitting up.
Howard sadly loses his mother this season.  It was hard to see him go through that.  Stuart and him of course bump heads a bit this season over Howard's mom.
Leonard and Penny are finally going to get married!  We see them driving to Vegas to elope, Leonard drops a major secret on her though.  So we will see if they go through with it.  Penny gave up acting and is no working a day to day job.
Sheldon buys Amy a ring!  Sadly she asks to take a break before he can propose!  She doesn't realize he was ready to take the next step and she is tired of their relationship not going anywhere.

Even though there is some major sad points this season, The Big Bang Theory season 8 is full of laughs!  Sheldon as always makes insensitive remarks and doesn't realize it.  Penny is really starting to grow as a person and finding her way in the world.
Season one will always be my favorite, but Season 8 did live up to the same witty humor I have come to expect from the Big Bang Theory