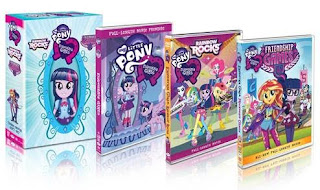 If you would have known me as a little girl I can guaranteed we had several conversations about My Little Pony.  As a child I thought Megan was my best friend, I thought spike was the cutest dragon ever and I couldn't wait to get a ride from FireFly or one of the Flutter Ponies!
I cried when Heart Throb stole the ponies shadows and even get mad when those mean witches wouldn't let them alone.
Little girl me thought the ponies were the greatest thing ever.  Now almost 30 years later I still adore them and for different reasons.
Now I like that they offer a great heartfelt show for my kiddos.  That they stress the point of being a good friend and working together.
The ponies may have changed in appearance quite a bit over the last 30 years, but they are still the sweet ponies I remember.

A few years ago they released the Equestria Girls movie. Twilight Sparkle was cast into a different world where she was no longer a pony but a real girl!  She had to use her magic to save the day and along the way she got to meet several new friends.
From there 2 other movies were made and now for the first time ever you can own all three!!

Equestria Girls
When a crown is stolen from the Crystal Empire, Twilight Sparkle pursues the thief into an alternate world where she transforms into a teenage girl who must survive her biggest challenge yet…high school. With help from her new friends who remind her of Ponyville’s Applejack, Rarity, Rainbow Dash, Pinkie Pie and Fluttershy, she embarks upon a quest to find the crown and change the destiny of these two parallel worlds.

Rainbow Rocks
Canterlot High is hosting a musical showcase and Rainbow Dash, Applejack, Pinkie Pie, Rarity, and Fluttershy are going to be performing with their new band, The Rainbooms. A new girl group, The Dazzlings, arrive at CHS and convince everyone to turn the friendly showcase into a Battle of the Bands. Tensions mount and a reformed Sunset Shimmer realizes that the Dazzlings may not be ordinary girls and are after something far more sinister. The Rainbooms call on Princess Twilight to return to their world to help them perform a musical counter-spell so that they can win a battle that now determines the fate of the entire school.

Friendship Games
Canterlot High meets its rival school, Crystal Prep Academy, in a competition that’s a long-standing tradition — the Friendship Games. Sunset Shimmer is tasked with keeping magic out of the games to avoid the appearance of impropriety while she and her friends compete against Crystal Prep’s top students led by someone with an equal amount of interest in Equestrian magic — this world’s Twilight Sparkle.

In stores everywhere October 13, the 3-DVD set is now available for pre-order atAmazon.com.

I remember when Rainbow Rocks was on tv my kiddos and me have it auto set and all made sure to be in the living that night to watch it together.  We laughed, cheered and sang along to the fun.  Even though we seen the first two movies it was still fun rewatching them together.  And this was our first time watching Friendship Games, it was just as fun as the first two.
Great animation, a loving story line and of course fun!

This set releases on October 13th more than enough time to purchase for the holidays :)