MY LITTLE PONY EQUESTRIA GIRLS: FRIENDSHIP GAMES
I watched the My Little Pony show when I was a kiddo.  I still have all my pony toys.  I thought for sure when I had boys that would be the end of my love for My Little Pony...
I was wrong, to my hubby's strong disapproval Quinn ADORES My Little Pony!
Whenever he has the remote that is what he turns on Netflix.
The ponies have changed a bit through the years, but the same friendship message is there.
The ponies teach us life lessons in a fun cartoon way.
Their latest movie is fun, colorful and sure to have kids (Boys and girls) everywhere smiling.

MY LITTLE PONY EQUESTRIA GIRLS: FRIENDSHIP GAMES
TO BE RELEASED ON BLU-RAY AND DVD
October 13, 2015 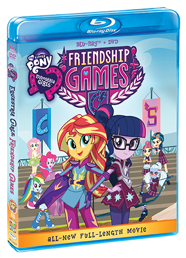 In 2013’s original film My Little Pony Equestria Girls, Twilight Sparkle’s crown was stolen from the Crystal Empire, and she pursued the thief, Sunset Shimmer, into an alternate world where she finds herself turned into…a teenage girl! To regain her crown and return to Equestria, Twilight had to learn how to fit into this strange, new world and defeat Sunset Shimmer in a competition to become crowned Princess of the Fall Formal at Canterlot High.
My Little Pony Equestria Girls: Rainbow Rocks, released in 2014, found Canterlot High hosting a musical showcase, and Rainbow Dash, Applejack, Pinkie Pie, Rarity, and Fluttershy performing with their new band, The Rainbooms. But when The Dazzlings, a new girl group, arrived at CHS and convinced everyone to turn the friendly showcase into a Battle of the Bands, tensions mounted between the competing musical acts.  After a reformed Sunset Shimmer realized that The Dazzlings may not be ordinary girls and were after something far more sinister than just being named Best Band at Canterlot High, Princess Twilight was called upon to help win a battle that would determine the fate of the entire school.
Now, in the new animated film My Little Pony Equestria Girls: Friendship Games, Canterlot High meets its rival school, Crystal Prep Academy, in a competition that’s a long-standing tradition –The Friendship Games: a series of exciting events that includes archery, motocross, and rollerskating!  Sunset Shimmer is tasked with keeping magic out of the games to keep things fair while she and her friends compete against Crystal Prep’s top students led by someone with an equal amount of interest in Equestrian magic this world’s Twilight Sparkle.
Continue the journey through high school with the Mane 6 in this alternate My Little Pony universe, and find out what happens next in My Little PonyEquestria Girls: Friendship Games!

Quinn loved each and every one of these!  They are filled with friendship, songs and love.  The story lines are perfect for little viewers and it is always fun seeing how the ponies handle tough situations.

This DVD is ready for preorder through both amazon and ShoutFactory.