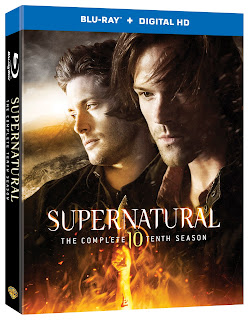 Several years ago my little sister asked me to watch Supernatural with her.  Being the mean big sister I was I told her no.  A few months ago she said I really don't understand why you don't watch it I know you would like it.
So I rolled my eyes, said "whatever I'll try it, even though I know I wont like it."
I was so WRONG!  I LOVE it, my hubby and I binge watched the first 9 seasons this summer.
I can't get enough of Sam and Dean...  Okay I'll admit I have a bit of a crush on Dean <3
As we were watching I would call my sister at certain points and force her to tell me what happens.  Or if someone really dies.  Anyone listening to our convos had to think we were nuts when I kept bringing up a yellow eyed demon!
So season 9 came to an end.... AND WHAT AN ENDING!  I was all pumped to go over and watch my sisters DVR episodes....  Only to find out the little brat never DVR'ed them!
She didn't even watch them.  She told me she always waits for the DVD Blu-Ray set to come out!
I couldn't believe she done this to me
I told my hubby we were going to have to buy them digitally on amazon.  He said no it will be cheaper to wait for the season to come out.  At this point in time I suggested we google search "watch episodes online for free"  He gave me a dirty look and said when the FBI shows up for you watching them illegally, I'm telling them it was you.
So with a huff I gave up....  Until I realized that my sister was the cause of this stress so I called her.
"Brittany, I know a way to watch season 10."
"I'm doing the dishes, what do you want?"
"I told you we can watch season 10 of Supernatural.... RIGHT NOW!"  I hear her huff and then hesitantly ask..
"How?"
"You can order them on amazon and we can watch them on your laptop... I'l bring popcorn"
"I don't have the money for that.  I have to go I'm doing dishes"  Gah the nerve she didn't even try!
"I hope you drop your phone in the sink!"  Click

Don't worry fans a week later I got an email asking if I wanted to review Supernatural The Complete Tenth Season!  I couldn't contain my excitement.  Even though I still had to wait I was pumped to get a it a few days sooner.

So for all you Sam and Dean fans out there let me break down season 10 for you.  There may be some spoilers so stop reading if you didn't watch yet.

Contains All 23 Episodes From Season 10, Plus Bonus Content
Including 6 New Featurettes, Commentaries, Deleted Scenes,
A Gag Reel, And More!

What can you expect when embracing your bad self is the only option? Find out as the thrilling journey of the Winchester brothers continues when Warner Bros. Home Entertainment releases the tenth season ofSupernatural on Blu-rayT, DVD and Digital HD on September 8, 2015.Supernatural: The Complete Tenth Season contains all 23 gripping episodes from season ten and is packed with over four hours of bonus content.

After Dean Winchester lost his battle with power-mad angel scribe Metatron last season, he was resurrected by the power of the First Blade and transformed into a demon, cursed with the Mark of Cain. The road to recovering wayward Dean takes brother Sam down sinister paths himself, with consequences that will shake the boys to their core. The Winchesters’ angelic comrade-in-arms Castiel must pick up the pieces in the aftermath of Metatron’s campaign to overtake Heaven. With his divine “grace” failing and rogue angels still loose, Cass faces the ticking clock of his own mortality while all-new and ages-old threats again push our heroes to their human and otherworldly limits.  At the same time, the King of Hell, Crowley, must deal with dissension within his own twisted family. Supernatural: The Complete Tenth Season will unleash your inner demon and hold you spellbound.

Airing Wednesdays at 9/8c on The CW, Supernatural returns for its eleventh season this fall on The CW.

With Blu-ray’s unsurpassed picture and sound, Supernatural: The Complete Tenth Season will be released in 1080p Full HD Video with DTS-HD Master Audio for English 5.1.

My review:
We all have those shows that we can't get enough of.  For me Buffy was the first.  I remember watching it over and over and it didn't matter how many times you watched an episode it was just as good the 2nd 3rd 4th and even 5th time.
Next of course was Friends and more recently The Office.

I have other shows that I love of course, but....
These are the shows that if the end of the world was coming and I had to go underground and only had time to grab a few DVD's (that I would be forced to watch over and over again) these would be the ones I grab.
And I now have a 4th set I would grab and that is Supernatural.  The show is honestly addicting and no matter how many times I think I have something figured out a new twist is thrown in.
Sam and Dean's relationship is the best though I think their brotherly bond is what makes the show.
Okay well the demons, angels, thrilling story line and paranormalness make the show, but Sam and Deans bond just adds to the magic that is Supernatural.
We start the season with Dean in his new demon form and for once doesn't care about Sam.  Well Demon Dean doesn't care.
Hannah is trying to save Castiel's life, but he wants her to respect his choice.  Crowly though does return him to full grace, but only to deal with Dean.
Dean does return to his human form, but carries the mark of Cain still.  They need to remove that mark.  A mark that in order to remove will have quite the cost
Dean should take a break from hunting, but in normal Dean fashion he doesn't.
The brothers are tested like never before.  Season 10 by far is my favorite it has all of our paranormal favorites Werewolves, crossroad demons, angels, demons, vampires, spirits and so much more.  I love all the lore and urban legends that get addressed and shown in a new light.