I was given ticket to enjoy the show with my family.  All opinions are still my own. 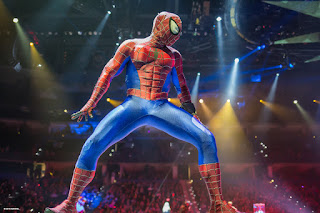 Yes this is what I dealt with for an hour drive last night when we took our boys to see the Marvel Universe LIVE!  Show.  As with most boys my kiddos LOVE all the Marvel super heroes.  Heck Quinn watches Avengers over and over again.  We have every action figure humanly possible and on really good days we even dress up like our favorite super heroes.
Now we got to attend the show in Allentown, but don't worry dear readers the show is coming back to PA in November at the Giant Center in Hershey PA.

More about the Show:

Marvel fans, assemble! Marvel Universe LIVE! is taking the live entertainment experience to a whole new level, with an epic show unlike anything you’ve seen before. Watch your favorite Marvel Super Heroes including Spider-Man and The Avengers (Iron Man, Black Widow, Hulk and more) and sinister villains come to life in an action-packed arena performance.
Produced by Feld Entertainment, Marvel Universe LIVE! is performing at the Giant Center, November 28 Marvel Universe LIVE! will captivate audiences with an authentic and original story that brings more than 25 Marvel icons together on one heroic quest.
The Cosmic Cube, the source of ultimate power and one of the most feared and coveted treasures in the Marvel Universe, has been shattered into pieces by the Mighty Thor in order to prevent it from falling into the wrong hands. With the pieces scattered across the globe, Thor’s villainous brother Loki devises a scheme to clone its powers, inciting a threat that could not only decimate Earth but also obliterate the Universe. You’ll definitely feel the energy with cutting-edge special effects, pyrotechnics, aerial stunts, martial arts, motorcycles and more. It’s being hailed as the most technically advanced live show ever.

Join Marvel fans of all ages for this monumental performance. The fate of the universe depends on it! Tickets are available at www.ticketmaster.com, The Giant Center Box Office and www.marveluniverselive.com.

All I have to say is WOW!  I have never attended such an action packed live show before!  At times even I was on the edge of my seat watching in AWE at some of the stunts they did. 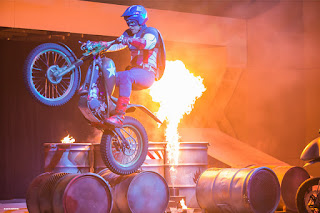 So you know if I was in awe my two Marvel Super fans were beyond ecstatic!  I think at one point in time little Quinn even burst out of his seat cheering on something Spidey was doing!
The stunts were awe inspiring, the acting was breath taking and the costumes really made it look like our favorite super heroes were right there in front of us.
I loved the super hero costumes, the villains looked a bit silly.  It only added to the fun.
And Loki isn't the only bad guy to make an appearance.

I want to mention I don't think an adult would enjoy this show alone.  It was cute, but I more so loved it because of how much my boys liked it.