The Wild Thornberrys: The Complete Series

I was given product in this post for the purpose of review.  i was not paid to write this review.  All opinions are my own.

The Wild Thornberrys: The Complete Series

I was born in 1987, which means I grew up with some pretty awesome cartoons.  First it was The Gummi Bears, My Little Pony, Fraggle Rock, Jetsons, The Flintstones and of course Loony Tunes.
After that came the dark years of Barney (JK though I don't like to admit I use to watch it lol)
Then came the Rugrats, The Wild Thornberrys, Hey Arnold, Ed Edd and Eddie, AHH Real Monsters, Ren and Stimpy and so many more.
It has been years since I watched these shows and I am super excited to see many of them are now being released as full series sets.  It means I get to share them with my boys!
The most recent is The Wild Thornberrys:
The Wild Thornberrys: The Complete Series 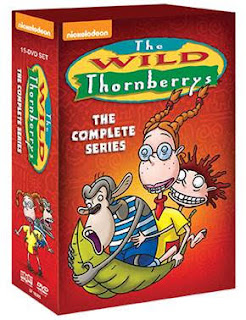 This fall, climb aboard the Thornberry CommVee and get ready for a wild adventure with the release of The Wild Thornberrys: The Complete Series on DVD. Available at Wal-Mart on October 20th, 2015, the 15 disc set contains all 91 globe-trotting episodes of the popular Nickelodeon series.

The hit series The Wild Thornberrys follows the Thornberry family as they travel the world in their Communications Vehicle (or CommVee) looking for rare animals to film. After an encounter with a mysterious shaman, their youngest child Eliza was given the power to speak to animals! Travelling to every corner of the world with her family of daffy documentarians, Eliza uses her fantastic skill to learn about the lifestyles and habitats of the world’s most exotic creatures. Encounter wildlife in all its natural glory and eavesdrop on Eliza’s conversations with silverback gorillas, pythons, crested grebes, tapirs, capybaras, antelopes and more while the CommVee travels on!

I love sharing these childhood favorites with my boys.  And they are still as fun at 28 as they were when I was a kid!!