I was given coupons to purchase the products in this post.  ALl opinions are still my own.

A few weeks ago I was introduced to a new company.  Best Choice Products!  I was able to review two toys and I instantly fell in love!  I couldn't get over not only the quality of the toys but the fact so much time and detail went into making them fun.

I was again offered the chance to review more of their toys and I couldn't wait to share them with you! 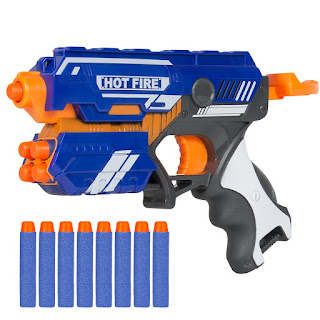 This is a great long range small dart blaster.  The smaller size makes it perfect for little hands to control.  My boys are 4 and 8 and they can both easily use this product.  The trigger is easy enough for my youngest to pull with no effort at all.  It shoots pretty far and has good accuracy!   Obviously the further away you shot the less accurate, but for anything 10-12 feet away you can hit it easily.
The blaster can hold 5 bullets so you can reload and keep playing after shooting your first dart.
The darts are foam so they don't hurt when you get hit (Well unless you get hit the face that kind of stings!!)
The gun is universal size!  We were able to use the darts from blasters we already had at home.
The set does have 10 darts so even if you lose one or two there are lots to take its place.
Even though it is small this little blaster has some real power :) 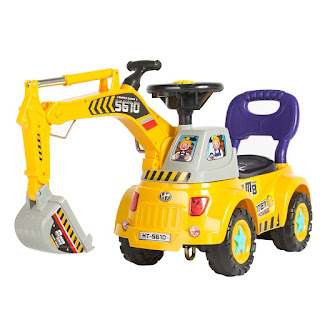 Before I start my review I want to talk about putting it together.  I will include photos to try and show you what I mean.  First off this comes 95% put together all I had to do was put together 4 pieces. 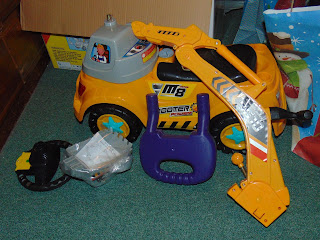 Even the stickers were on!  As a parent who always puts them on wrong this was a huge perk for me
The only issue is there isn't really any instructions.  Not a huge issue though because it is pretty self explanatory.  You get 3 screws I only used two (fingers crossed the 3rd was just an extra.) You start off by putting the bucket on the end of the arm lever.  There is instructions for this part, you simply slide into place and put in two screws.
Next I attached the wheel.  For this step (photo include) you need to remove the screw in the middle and put your wheel on.  I had a hard time lining up the holes at first.  It was a simple fix though I just pulled up on the metal piece! 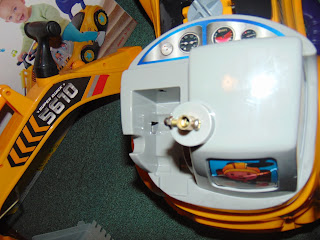 SO if you are having issues it just may be sitting low.  Pull up it will get it in the right place. Stuck the screw though and tada step two was done!
I now attached the claw and the back seat.  This was super easy all I had to do was snap them into place. 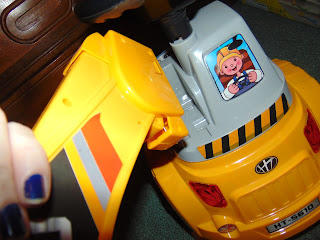 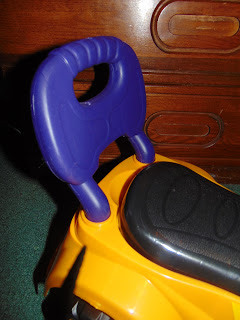 The seat lifts up and inside there was some cool gardening tools!  The best part is when kids are done playing they can restore their tools in the seat. 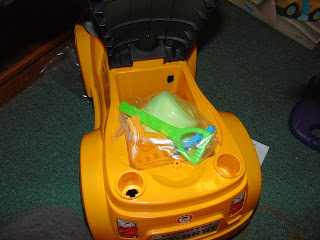 The wheel does need batteries, they are no included.  Then you can push a button to play music, beep a horn or hear a siren. 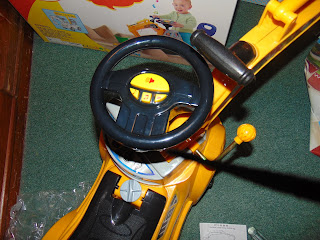 I love the actual scoop action of the bucket and the fact kids can easily access this lever!  THis is a toy though so you dont need to worry about holes in the yard!  If anything I would put a small pile of sand somewhere and let my kiddos have a blast diggin through it.
You can control the claw one of two ways.  You can use that black handle thing on the top to push it up or down.  The sliver handheld on the side is for scooping or dumping out. 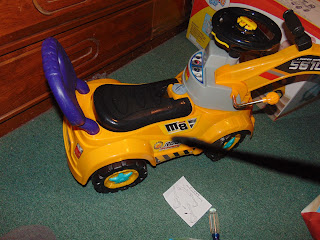 My little guy is about to turn 5 and it was the perfect size for his little body.  This is a great ride on toy!  It was easy to put together and my boys had hours of fun when I was done!! 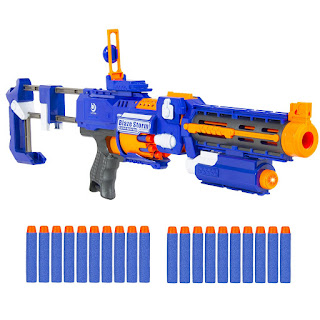 I gave this gun 5 stars on amazon..
But at first I hated this gun!  For those of you reading my 5 star rating and thinking"huh WHAT?" let me explain.  When I first took it from the box I wasn't to impressed with the plastic.  It felt cheaply made.  So I attached the back gun stock, loaded up my bullets, pulled the trigger and nothing?
Okay?
So I realized I need 3 AA batteries to get this to run.  To the store I went to get said batteries, got home and realized I had to go outside (Shed) to get a screw driver to get  the batteries in.
At this point I was pretty frustrated.  So I loaded the batteries, reloaded the gun, aimed at my hubby, pulled the trigger and........ BAM 5 star review!!  The needed batteries were so worth the extra power it gave this dart blaster.  My hubby was across the room and it traveled at lighting speed towards him!  I'm not even joking I heard a thump when it hit him lol
Better yet I could load several bullets at once so I was able to get him a few more times before he reached me and took the gun from my hands!
The gun is long, when the gun stock is placed on the back it is longer than my arm, I kind of rest it under my arm when using.  The gun stock is removable though so if this is to long just take it off.
As I said 3 AA batteries are needed.  There is an off on switch, to get what I guess, is air moving to make the darts fly.  There is also a cool laser feature that allows you to aim where you want shoot. (Battery was provide for this part)
The trigger is really easy to pull and even my 4 year old can shoot with no issues at all.  I am yet to have it jam up.  ANd the rapid fire is awesome, you can load 10 bullets at a time.  You can shoot a target several times in just a few seconds.

As I said the plastic isn't the highest quality, but it gets the job done :).  I only had the gun for a few days now so I can't really comment on how long it will last.  Fingers crossed a long time, because it really is a lot of.  ANd I still can't get over how much power it has!!