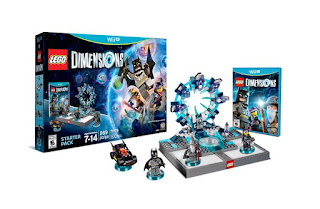 A few weeks ago my hubby and I took my boys to Game Stop.  We don't do this often because we always spend more than we want to!  I mean really I don't even see why we lie to ourselves and say we are only getting one game for the family to play :)
On our latest trip I wandered off by myself and left my hubby and boys to fight over which game to get.  That is when I found it, Lego Dimensions!  The entire wall was filled with different sets and characters you could build and play.  This would be the perfect family game since we could all pick our favorite set!  Off to my hubby and kids I ran with it in hand to show them the little treasure I found.
I was greeted with go away stares and 'mom shhh we want this game.'  Now there are few times as a mom I really put my foot down.  I mean really, this game was perfect for us!  The kids could be Batman, I could be one of my beloved Lord of the Ring characters and my hubby could be Homer from the Simpsons!
So I took their games from their hands stuck them on the shelf and dragged them back to the wall of wonders!  Once they seen all the sets and different characters they could be, they too got super excited to play :).
The first day we only grabbed a starter pack and Jurassic World.  We went home and put the game together.  I thought this was super cool, the figures are actually Legos that you need to build!
Not only do you get to be characters, but you also have dinosaurs, cars and other devices to ride.
You do different levels and get to travel to all sorts of worlds.  The game is funny too!
The little quips the characters make to each other :)

I talked to them a bit at Game Stop and they told me unlike other current games I only need to buy the portal once!  Next year a new portal wont be coming out where I need to buy it just to play with new characters.
They said as far as they know the starter set is a one time deal!!  WHOOT my bank account is so doing a happy dance right now.
On October 31 I had my boys a b-day party and they spent all their card money on new Lego Dimensions character packs!  They got Scooby Doo, The Simpsons and the Wizard of OZ Witch.
I bet you never thought there would be a game with all those characters together!!

I have a feeling there is going to be quite a few team packs under my tree this year for the boys.
The amazing people that represent Lego Dimensions sent me a brand new team pack to test out with my boys
Ninjago Team Pack 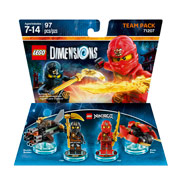 Build Cole and Kai and place them on the LEGO Toy Pad to bring them to life in the exciting LEGO® multiverse. Use their golden Ninja weapons, unleash their Spinjitzu skills and activate other special abilities to overpower any enemy who stands in their way. Call in Cole's awesome 3-in-1 Boulder Bomber and Kai's 3-in-1 Blade Bike and rebuild them for upgraded abilities in the game! 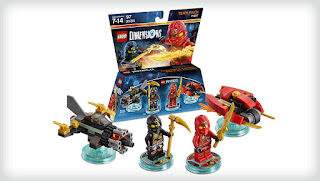 Just like all the other sets putting them together was super easy.  We are Lego fans in my house so we know our away around Legos :)
If you lose the directions that is okay they can be accessed from the game
Once they were together all we had to do was put them on the portal pad to bring them to life.
The little characters look 100% alike on our TV.  It was pretty cool to see them brought to life this way.

Since you can keep buying new Team Packs this is the game that will never get old!
It will keep changing and the play will go on forever!

I have made some pretty dumb purchases in my life, but I have to say this may be one of the best investments I ever made.  Not only do I get hours of fun play, but we can also play as a family.  The game is silly and makes us all laugh, the adventure is fun and keeps us all engaged and finally we all keep looking forward to new packs coming out.
We are all pumped for the January 2016 release of Ghost-busters!!

To learn more please see my link below:
Lego Dimensions