PAN released just in time for the holidays

A few months ago my sister and I were sitting at the movie theater, watching previews for upcoming releases.  We  both added several to our future viewing list.  We like the same kinds of movies so most of them were the same.  When we seen the preview from PAN I think we both leaned forward a bit in our seats :). 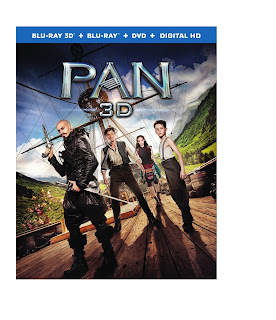 We so wanted to see this and even though we didn't get a chance to see it in theaters we did still get to see it together!

And I am happy we did!  It was just as magical and as awesome as we knew it would be.  Forget everything you know about Peter Pan, well no that isn't true, technically this movie goes back to before the Pan we knew.
It shows us how Pan became who/what he is.
Own PAN on Blu-ray 3D Combo Pack, Blu-ray Combo Pack or DVD on December 22 or Own It Early on Digital HD on December 15!
Peter (Levi Miller) is a mischievous 12-year-old boy with an irrepressible rebellious streak, but in the bleak London orphanage where he has lived his whole life those qualities do not exactly fly. Then one incredible night, Peter is whisked away from the orphanage and spirited off to a fantastical world of pirates, warriors and fairies called Neverland. There, he finds amazing adventures and fights life-or-death battles while trying to uncover the secret of his mother, who left him at the orphanage so long ago, and his rightful place in this magical land. Teamed with the warrior Tiger Lily (Rooney Mara) and a new friend named James Hook (Garrett Hedlund), Peter must defeat the ruthless pirate Blackbeard (Hugh Jackman) to save Neverland and discover his true destiny—to become the hero who will forever be known as Peter Pan.

The visual effects are awesome, the acting is spectacular and this is a must see for all ages!!