Disclaimer:  I was given products in this this post for the purpose of review.  I was not paid in anyway to write this review.  All opinions are my own.

I adore my dad, really I do.  Sometimes he drives me nuts, he is a manager at work and the man can't spell to save his life.  Every time he needs to write someone up at work he calls me to help him spell things.  Not to mention whenever he tries a new recipes he only has the main part of the dish.  I need to lend him all the seasonings, milk oil and everything else lol
The man most days is helpless, but he is my helpless dad.
One of the things we love doing is watching TV shows together.  Right now we are addicted to The Big Bang Theory and The Goldbergs.
We watched every Friends episode together and every Office episode together as well.
We are always looking for new shows and we just found a new one to watch together!
Legend 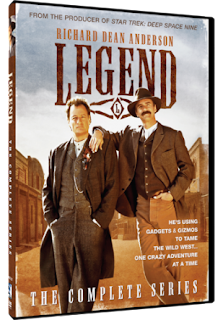 So even though the series wasn't long it was still so much fun!  It combines both comedy and an old west feel to make it an instant classic!  I was so bummed to realize there was only 12 episodes!  I wanted more.

TO learn more or purchase for yourself please see my link below:
Legend The Complete Series

Legend The Complete Series is just one of the many shows offered by Mill Creek Entertainment!  They have so many shows both old and new.