Disclaimer:  I was given products in this post for the purpose of review.  I was not paid to write this review all opinions are my own. 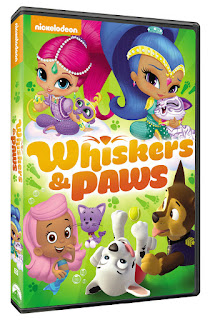 We all have those days where it feels like anything that can go wrong will go wrong.  Murphy was right and as a mom I have mad my fair share of those days.  Lets not lie I have had entire weeks!!  For Christmas break it was non stop going between the holiday parties, Christmas day, New Years and cleaning it all up it was exhausted!  Add to that this week my boys had dentist appointments and karate every single day I am just ready throw in the towel lol
Today we have more karate and I have a PTO meeting, but today I just get to lay around and relax!  Brandon Jr is at school and well Quinn is going to have a TV day.
Gasp, hiss, claw!  Yes I know a few moms out there think TV should be very limited, but what can I say I am human and today the TV will be babysitting for me ;)
When I do this there is one channel I can always count on to keep Quinn entertained and that is Nick Jr
There programming is perfect for little ones and their shows are fun.
You may not know this, but Quinn is crazy about Paw Patrol.  I have a certain Christmas shopping order to show it!
When I seen the new Whiskers and Paw DVD I just knew it was for him.
Nickelodeon's favorite characters are preparing for the spring with some cute and cuddly new friends in
Nickelodeon Favorites: Whiskers and Paws.
This furry and fun collection features over two hours of content from some of Nick's newest and greatest shows. New Nickelodeon shows Shimmer and Shine and Fresh Beat Band of Spies make their DVD debut as they encounter a zoo full of animals and an out-of-control bundle of bunnies. Other Nick adventures include the PAW Patrol pups trying to control some naughty kittens; Dora and Friends making peace between cat and dog; the Bubble Guppies getting an education in house cats; and Blue spending time with her bilingual kitten friend Periwinkle in Blue's Clues. Created by Nickelodeon and distributed by Paramount Home Media Distribution, Nickelodeon Favorites: Whiskers and Paws hops its way onto DVD January 26, 2016

Nickelodeon Favorites: Whiskers and Paws includes the following episodes:
Shimmer and Shine: Abraca-Genie - Leah notices Zac's magic tricks aren't going quite so well, so she calls on her genies for some real magic assistance. Shimmer and Shine don't get the tricks right either, and suddenly more than a rabbit pops out of Zac's hat-- a whole zoo of animals! The girls have to find a way to fix the magical mess before Zac's big performance.
PAW Patrol: Pups Leave Marshall Home Alone/ Pups Save the Mischievous Kitten - While at the Lookout by himself, Marshall gets a distress call-- Katie's kittens are on the loose! Can Marshall use all the Pup Packs to save the day on his own? / To win the Spotless Town award, the PAW Patrol pups must save Adventure Bay from Mayor Humdinger's naughty Kitten Catastrophe Crew!
Dora and Friends: Puppy Princess Rescue - When the Puppy Princess of Doggie Land goes missing, it's up to Dora, all her friends, and their puppies to settle a feud between the canines and the cranky cats!
Fresh Beat Band of Spies: Bunnies Go Bananas - When a bundle of bunnies accidentally turn Bo Monkey's banana plant into a gigantic banana monster, the Fresh Beat Band of Spies must work together to create an antidote solution before it's too late!
Bubble Guppies: Bubble Kitty! - Molly and Gil find a lost kitten named Bubble Kitty and the Guppies learn that house cats are related to big cats. When Bubble Kitty's owner calls, the kids take Bubble Kitty home to Meownt Rushmore, a rocky tribute to cats!
Blue's Clues: ¡Un Día Con Plum! - A visit from Plum, Periwinkle's bilingual friend, gets kids to learn new Spanish words. Meanwhile, Plum and Periwinkle are building a marionetta together and kids play Blue's Clues to figure out what kind of marionetta Blue thinks it should be.  Kids figure out what certain words mean in Spanish by helping to identify missing body parts from Plum and Periwinkle's marionetta.

These are all his favorite shows!  Today was the perfect TV because all I had to do was put this DVD and he was good to go for 162 minutes!  Yes I am serious I got 162 minutes all to myself today lol.
Well lets not lie I still have 3 pups and no matter how many times I try to put them in front of the TV they just don't stay 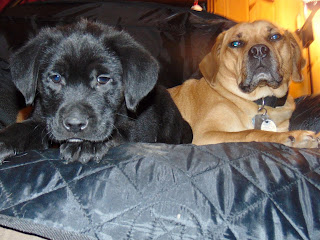 That is so the "yeah right mom" look lol