I love the cold.  Putting on my favorite sweater, making a mug of hot chocolate and curling up in front of my heater with a good book is my idea of a good time.
My boys are the other hand HATE the cold.  If there is snow they are good, but on days when it is just cold and deary they go nuts locked  up in the house.  And to be honest I go a little nutty too with them lol

There is a few tricks my kiddos and I have for beating those Winter blues.
1 of them is doing a fun craft.  We get out our craft box and do something fun together.  I am sure you know though a craft will only last 20 minutes top.
So another trick we have is to make something sort of food together.  Again this will only take up a small amount of time.  Plus I have to help with both.  Sometimes I just want some time for myself.  Even if it is just to read for an hour or two.  Or to shampoo my hair!!  lol yes I want time to wash my hair!!
Which is where the video game systems step in!  We have so many systems.  When my hubby and I got together he had a Sega and Playstation.  I had a Super Nintendo, gameboy and a Nintendo 64
Since then we purchased the old school Nintendo, PS3 and PS4.  And XBOX 360, a WII, WII U, A DS and a 3DS.
Don't worry I am sure I am missing one or two of them.
I myself don't play the games as much as I use too.  Even though you won't have to twist my arm to hard to get me to play DiddyKong racing ;)
My boys though LOVE it!  And I love that it gets them out of my hair.
They were pretty excited when I told them about the 2 brand new games we would be getting to test:
Mario & Luigi: Paper Jam

Paper Mario jumps out of a book and into the bizarre adventures of Mario & Luigi, resulting in hilarious (and dangerous) hijinks! Become the superstar team of Mario, Luigi and Paper Mario to take on quests, take down enemies and untangle these two unique universes in this playful new entry in the Mario & Luigi series.

According to my 8 year old you need to use the paper guys to battle enemies.  He likes finding the scared Toads.  Your mission is to get all the paper guys back into the book, that Luigi opened.  He likes doing the missions and finding new guys. 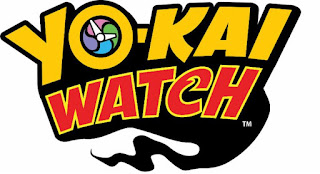 The popular Japanese sensation YO-KAI WATCH has come to the United States with hundreds of cute, spooky and mischievous Yo-Kai (physical beings that inhabit the world and represent different personalities and fears). Explore the world to find Yo-Kai, befriend them and turn them into a team to battle other Yo-Kai.

This was a new game for us, we never played it before.  But of course being the video obsessed little boys that they are my kiddos knew what it was.  You play the game as a little boys who is obsessed with bugs.  The boy stumbles upon something and is given a Yo-Kai watch, with the watch he must travel and battle/befriend Yo-Kais to be on this team.
This game kind of reminds me of the Pokemon games, but it is so much better!!  You interact more during the game and it has deeper more meaningful game play.


So I was given those two games for review, but recently my hubby purchased Super Mario Marker for my boys and they LOVE it!!

In this game you get to make you own levels.  I have played Mario ever since I was a little girl and I have to admit it was pretty cool seeing my of my beloved childhood games like this.  You have no clue how many times I played Mario and just wished I can switch the details with Mario maker you can.
We got it for the WII U

All three games are super fun.  They are both mom and kid approved and sure to keep your little one (Or to be honest even adults) entertained for hours.
You can learn more here:
Nintendo
or you can even play game and check out other cool things here:
Play Nintendo