Disclaimer:  I was given a product for the purpose of review.  I was not paid to write this review.  All opinions are my own.

When my hubby and I started to date he was really into rap music.  I have no issue with rap music and even like a few of the songs, but he was a bit over the top with it and would blast his music as we were driving.  I get car sick so any type of loudness makes me nausea.   He learned his lesson the hard way and felt bad and told me next time we go out I could decided what we listen to...
BIG MISTAKE!
You see my car was filled with audio books, whenever I left the house I would listen to them.  I went into school late a few times, because I was sitting in my car unable to pull myself away.
Try explaining to the office you were late, because you wanted to hear if someone was really dead!
Anyway my hubby (at the time boyfriend) didn't know this.  So the next time we left I ejected the current book I was listening to and put the cassette into his car.  It just happened to be Frankenstein :)!!  And we were at the part when the monster was getting a little out of hand and killing people off.
He didn't say a word the entire time, but I could tell he was freaked out this was the kind of stuff I listened to in the car lol.

Frankenstein is one of my favorites and I have listen to that cassette so many times I broke it!
When I seen MillCreek Entertainment was offering Frankenstein the Complete Mini Series from the Hallmark channel I just knew I had to have it.
This was the first movie/tv series that was anywhere near the book!  The only one that got it right in my option.

About:
FRANKENSTEIN THE COMPLETE MINI-SERIES EVENT 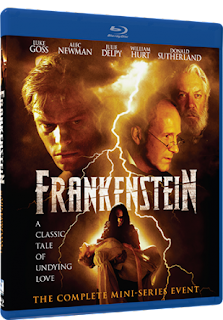 What happens when man violates the laws of God and science? For Captain Walton (Emmy and Golden Globe winner Donald Sutherland, The Hunger Games) and the crew of a weather-beaten ship stranded in the icy sea, the answer follows their rescue of a scientist close to death, frozen in fear, and insane with dire warnings. Viktor Frankenstein (Alec Newman, Frank Herbert’s Dune) has a story to tell—a story as chillingly real as the tortured howls emanating from the Arctic fog and as timeless as the need to be loved.

I have seen a lot of adaptions, but this one for me is the best.  And take it from someone whom has read and listen to the story at least 100 times!