Disclaimer:  I was given a review copy of the movie mentioned in this post.  I was not paid to write this review.  All opinions are my own.

Several years ago the original Alpha and Omega was released.  I don't think Quinn was born yet, or if he was he was really little.  But I do remember cuddling up with Brandon Jr to watch and both of busting up giggling the entire time (Come on you can't tell me you watched that movie and didn't lose it at the howling scene?!)  We fell in love with that movie and have watching every single one afterwards.  And what started off as Brandon and me cuddling up for movie night turned into the 3 of us getting excited every-time a new one is released.  I thought for sure there was no way the could top the last one.  And then they went and combined two of my boys favorite things.
The Alpha and Omega group
and
DINOS!!
The wolf pack is back in action when Alpha and Omega: Dino Digs 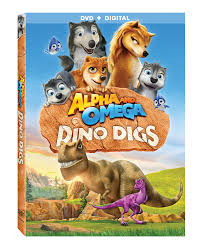 Arrives on DVD (plus Digital), Digital HD and On Demand May 10 from Lionsgate. In the sixth installment of the Alpha & Omega franchise, Humphrey and Kate move to new grounds and discover Amy, an affable dinosaur who is unfamiliar with the new world.

After Kate, Humphrey, and their three pups are forced to relocate their den, they discover Amy, a friendly raptor that magically came to life after being uncovered during a big dig! The pups and their forest friends show Amy the wonders of their new world, and must work together and try to stop the diggers from unearthing the dangerous T-Rex before it is too late!