Who remembers Kindergarten Cop?  I remember watching it and waiting for the Terminator to reveal his robot self :).  Shh I was a special kid, it wasn't until my adult life that I realize Bambi's mom was really dead and at the end that was his kiddos.... Not him waking up from a nightmare :(

Okay sorry I got off track, but yes I watched Kindergarten Cop with my dad a long LONG time ago.  We loved it and I giggled the entire.  It seems only fitting that part 2 comes out right in time for Father's Day!! 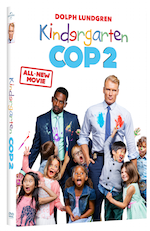 AVAILABLE ON DVD, DIGITAL HD AND ON DEMAND MAY 17, 2016
FROM UNIVERSAL PICTURES HOME ENTERTAINMENT

A family favorite gets re-imagined in Kindergarten Cop 2, a fish-out-of water comedy available on DVD and Digital HD as well as On Demand on May 17, 2016, from Universal Pictures Home Entertainment. Directed by Don Michael Paul (Jarhead 2: Field of Fire, Tremors 5: Bloodlines), Kindergarten Cop 2 stars action superstar Dolph Lundgren (The Expendables 3, Workaholics) and Bill Bellamy (White Collar, Royal Pains) along with an adorable ensemble of young actors and is bursting with laughs for the entire family.

Assigned to recover sensitive stolen data, a gruff FBI agent (Dolph Lundgren) goes undercover as a kindergarten teacher, but the school’s liberal, politically correct environment is more than he bargained for.

The Kindergarten Cop 2 DVD and Digital HD will delight longtime fans and new viewers alike with hilarious bonus features including deleted scenes, a gag reel and a behind-the-scenes look at the making of the film.