Dinosaurs.  I think all kiddos so go through that phase.  I was a little girl and even I had several years of being amazed by all things Dinosaurs.  I was a kid when Little Foot, Sara, Ducky and the rest of the gang were popular.
Now I have two little boys and just like me dinosaurs are the it thing :).  They don't have Little Foot though instead they have Dino Dan and that is okay because Dino Dan and his brother teach us a lot more facts that The Land Before Time ever did! 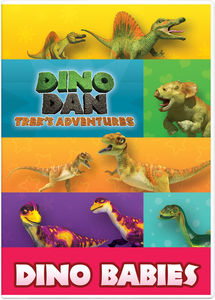 Join junior dinosaur expert Trek Henderson as he imagines dinosaurs in the real world - dino babies edition! Trek is amazed when he sees an Edmontosaurus laying her egg in a Triceratops' nest. With his friends' help, Trek learns that some animals will lay their eggs in the nests of animals that can do a better job of protecting their babies. Next, while Trek waits for his loose tooth to fall out, he finds a baby dinosaur tooth in the house and decides to figure out which baby dino it belongs to so that it can get a visit from the Dino Tooth Fairy! Then, while Liam babysits Trek, Trek has to do some dino-sitting of his own when a baby Albertosaurus, baby Brachiosaurus and a baby Spinosaurus find their way inside the house. It's up to Trek to get them out of his house before they turn it into a huge mess! It's time to get some dino time with these dino babies and more! Let's go embark on some dino-experiments with Trek and friends!