Back off chores this mama is watching Zootopia 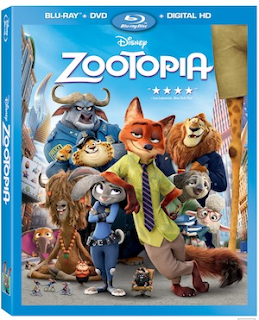 A few months ago my calendar was full!  I mean like bursting at the seems full.  I didn't complain because getting it all done in March and April just meant my summer was open to spend time with my boys.
On one of my busy weekends my hubby decided to take the boys to a movie.  I was bummed because I couldn't go but didn't want to take away everyone else's fun.  So off they went.  Later that night when we were all home again my hubby and boys couldn't stop laughing talking about what happened in the movie.
I sat by myself listening, but since I didn't see the movie I didn't really get what they were saying.  That was fine who doesn't talk about a movie after just seeing it?  I was really bummed the next day though when they were still talking about it!  And down right distraught a week later when it was still being brought up!
At this point mama knew she missed something big.  So like a little kid I awaited the DVD release date so I could finally be on the same page.
And oh my!!!  This mama now gets all the giggles, all the fun and I can finally make the same jokes the boys make
This movie is hilarious   with jokes and parts that are funny enough for both kiddos and adults.  I don't think I went more then 2 minutes without loosing it.  To give you an idea imagine a world like ours, but instead of us it is all animals.  They have the jobs, hobbies, ect.  Now imagine each of those animals brings a little bit of their animal personality along.  Foxes are sly, bunnies are fast, sloths are slow..... REAL slow lol.  Now mix them all together and watch how they interact with funny catch lines and out right hilarious scenes and you have Zootopia.
So let me talk a bit more about the movie:
From Walk Disney Animation Studios comes a comedy-adventure set in the modern mammal metropolis of Zootopia.  Determined to prove herself Officer Jduy Hopps, the first bunny on Zootopia's police force, jumps at the chance to crack her first case- even if it means partnering with scam-artist fox Nick Wilde to solve the mystery.

Put down whatever you are doing mom and dad.  Because this is a can't miss movie that the whole family should see!